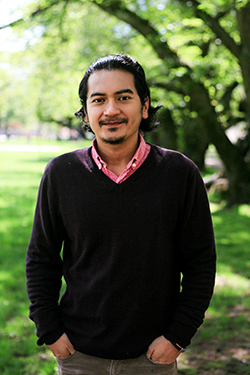 “I was a delinquent student, basically,” says Lex Marcos, talking about his time as an undergraduate Fine Art major University of the Philippines Diliman. “All I wanted to do was design and paint. So, I went to the teacher in the theatre department who taught scenic design and asked if I could enroll in his class. This guy was like Mr. Miyagi, right? Because I wasn’t in the theater department. I was in fine art. So, he was like, ‘Well, have you taken this technical class and have you taken this other prerequisite?’ and I was like, ‘No sir,’ and he was like, y’know, ‘Just because you are an artist doesn’t mean you can be a great scenic designer,’ and I was like, ‘I know sir.’ But, anyway, he let me into his class finally. And then, on the last day, he said, ‘Lex, you need to stay, I need to talk to you,’ and all my classmates were like, ‘Oh no, Lex! What did you do?’ I didn’t know. I thought I had accidentally plagiarized something from the internet or something like that, so then he goes, ‘I was talking to the head of the theatre department and I told him that I thought it’s time for us to train a new scenic designer. And we thought about you designing the play I’m directing this summer. Would you be willing to design it?’ and of course I said ‘Yes, I’d be happy to.’ And I told him that I had been so nervous because I thought I had some kind of problem, and he just laughed and said, ‘So, this is a good problem for you?’ And that’s how it started.” 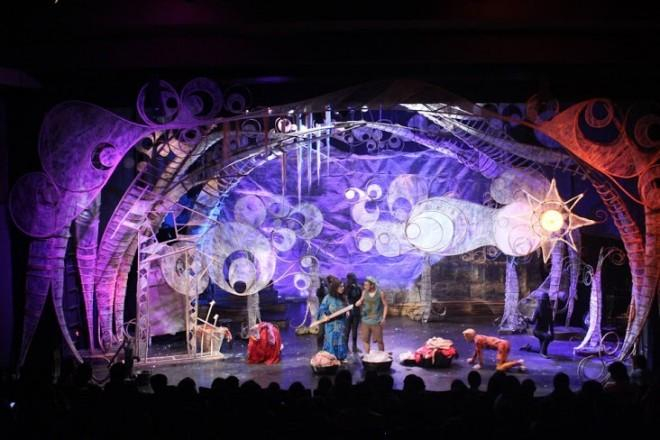 In the years since that teacher first took a chance on Lex, he has built an impressive career as a scenic designer. He started working in Manila while he was still in college, catching his first big break when noted designer David Gallo came to design the Arthur Kopit/Maury Yeston musical Nine, based on Federico Fellini’s film 8 ½. Gallo could only be in Manila for 10 days, and Marcos was hired as his design associate, charged with creating scale models and overseeing the build of Gallo’s set, even though he and Gallo had never met. When Gallo arrived in Manila, “He was very happy,” Marcos says humbly. It was the start of a new chapter for the young designer. “I ask David how I can come to the U.S. to work and study. He tells me I have to choose. If I want to work, work. If I want to study, study.” At Gallo’s urging, he applied to the extremely competitive program at NYU’s Tisch School. They turned him down the first time and wait listed him the second time. “And then I’m ready to move on,” he says. “I’m ready to continue my masters in Manila—like a painting degree or something.” No scenic design program was available in the Philippines. But then, out of the blue, “Here comes Tom Lynch emailing me.” Lynch, a member of the MFA Design faculty at UW Drama, had been sent Marcos’ portfolio by his colleague Susan Hilferty, Chair of the Design MFA program at Tisch. “I was really humbled when Tom Lynch sent me his works.” Lynch is a prolific designer who has designed for Broadway, Off-Broadway, international opera, national tours, and on London’s West End. His Broadway work includes A Raisin in The Sun, The Heidi Chronicles (Tony Nomination), and The Music Man (Tony nomination). After Skyping from UW Drama’s design studio, Lynch surprised Marcos by offering him a slot in the program for that coming fall. Marcos quickly arranged his paperwork and traveled to the U.S. to begin graduate school at UW. 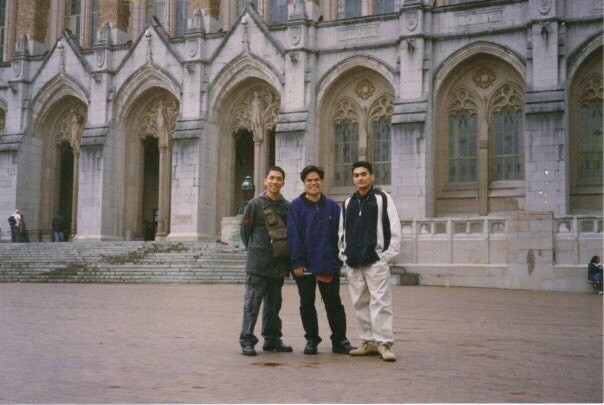 Marcos (right) and friends on his chorus trip to UW, 2000

Only when he arrived on campus did he realize that he had been here before. “I joined my university concert chorus,” he explains. “I’m not really a good singer, but I heard that they were touring Europe and the U.S., and I wanted to do that, so I joined that group, and just learned the songs by ear.” It was the year 2000, and the concert chorus’ “Millennium Tour” made a visit to the University of Washington. “I still have a photo of me in front of the UW from when I was 20 years old. I had no idea that I would be graduating from here.”

Asked how he grew as a designer during his time at UW, Marcos is at first quiet, “Oh, that’s a really good question,” and then effusive. “When I got here, I was always thinking of the finished product. Like, I just wanted to create that image.” But, through his studies, he realized that making theatre is about process and collaboration. “I remember Geoff [Korf] telling me that concept is very cheap. I saw from Tom how important it is to draw each scene…” Marcos says that, as he gained maturity as a designer, he became more capable of analyzing a script deeply, and valuing what he could bring to the story with his unique lens, and also what his collaborators had to offer. “What I was presenting in my first year—my visual process was so thin, and I was resistant to changing anything about my design. But when I presented my final design here, for As You Like It, it was my whole process, scene by scene, all drawings, all energy. And I was still open, like, if my director wanted to change things, I was happy. I became more of a visual storyteller.” 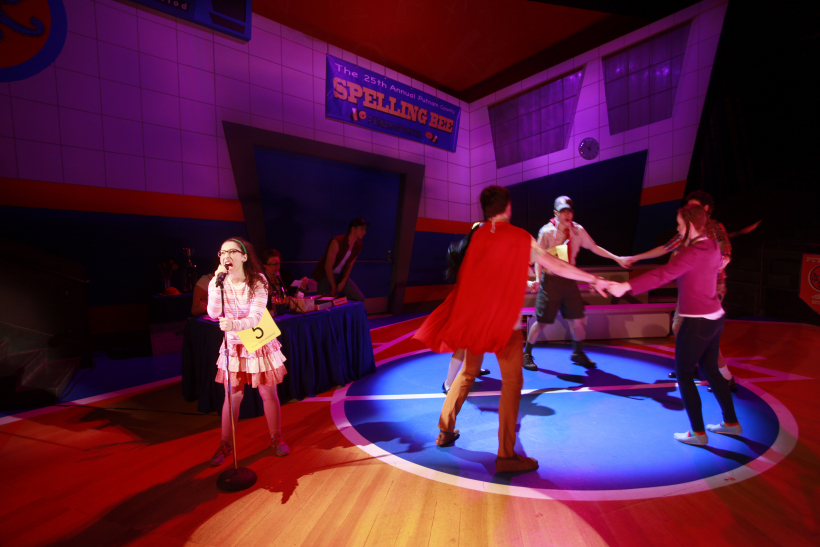 "Lex came to UW with a lot of prior experience and a very strong aesthetic identity," says Professor Geoff Korf, "He’s a tremendously talented designer who I think discovered at UW that his process could go much deeper than he had known and that engaging more deeply with the text did not mean that his great natural, 'gut' instincts, which had served him so well in the past, would be compromised."

In fact, Marcos has so embraced his role as a collaborator, that he now often votes to deemphasize scenic elements in favor of some other aspect of the production. “If a director talks to me about, ‘hey, we should do something about this problem,’ I’m aware that the solution is not always scenic. So, I’ll be like, ‘maybe we should talk to the lighting designer about that, or maybe it’s something with sound.” 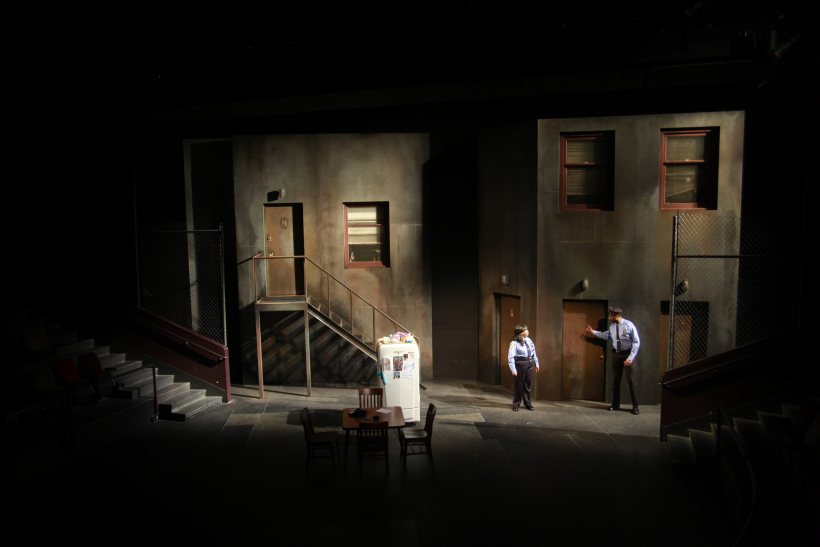 Marcos says he never really did that back in Manila. “Hey, I can really design, okay? Give me a play, I will design it. But now, I’m more holistic. In theatre, when you get that perfect moment, that perfect image, it’s not just the set. It’s the lights, the sound, the actors—that’s theatre. I’m always trying to help achieve that. But you know, of course, it takes the whole team.”

Today, one year after earning his graduate degree, Marcos is focused on continuing to learn from collaborators. “Right now, I just want to keep designing and learning from other artists, directors, and designers.” Eventually, he’d like to pay forward the life-changing trust that his professor in Manila, Amiel Leornadia, placed in him. “I’d like to mentor someone younger than me and pass it along—to inspire someone. That’s the legacy that my professor passed to me.”

Marcos' final design for UW Drama, for As You Like It, 2017 (Photo by Isabel Le)