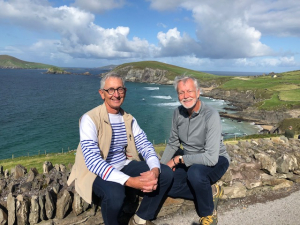 Meet Randy Everett (BA Architecture ’71, Master of Architecture ’72) and Gary Fuller (BA Radio and Television ’66), dedicated UW School of Drama supporters, subscribers, and advocates. Of the many UW community members who support the School of Drama, Randy and Gary stand out as longtime patrons, volunteers, and philanthropists who care deeply about our students. We hope you enjoy getting to know a bit more about them.

How did get involved with the School of Drama?

Gary: Well, we are both graduates of the University of Washington, so as students we both went to productions in the 60s and 70s, because it was inexpensive entertainment. That was when the Penthouse was in its original location and the Show Boat was still on the water. It was part of the campus culture really, because downtown theatres were too expensive to go to. The Rep was there and ACT had just started. Those were the only two professional theatre companies in town, so the University was about it.

Randy: I came to work at the university twenty years ago and when I did that we became season subscribers at the School of Drama because it was so easy to do. I worked in the Capitol Planning and Development Office on campus, and when the renovation of the Jones Playhouse Theatre came along it was my project. I met with [former School of Drama Executive Director] Sarah Nash Gates and [former School of Drama Production Manager] Anne Stewart. They had a committee to help select the architect. So, I got to know Sarah and Anne as well as other faculty that were involved with that project… At the end of that project, Sarah asked if I would join the School of Drama Advisory Board.

Gary: At the same time, I was on the board at the 5th Avenue Theatre and Sarah was also a representative on the board, so I got to know her that way. We would meet before going to the School of Drama productions on the Ave for dinner. That connection just continued on.

As we became involved with the School of Drama, we realized that you can make a difference for the students and faculty at a very easy level. And everything is part of an educational process. I am pleased to see the section of the program that differentiates the difference between productions at the University and Downtown [the pedagogical goals of each production]. Each production is doing many things, it’s giving actors certain opportunities, it’s helping designers…There is a goal for each show. And so when we were approached for additional support for Cabaret, we understood that all the pieces of a musical are so different than the rest of the programming the School does. That in order to do that kind of production, you need additional things. In this case, they identified Kathryn Van Meter as a choreographer who would be available to do it and also had the track record for working with inexperienced dancers. And we were happy to help the School bring her on and afford that experience for the students.

What has surprised you about getting to know the school?

Gary: We have not met anyone who is not an enthusiastic professional and who isn’t open to new ideas. Sometimes, if you are introducing a new program, you get resistance. And I know there probably was some, but we didn’t see it and I think that is important. Everybody we come in contact with is very welcoming…

Personally, we just want people in the theatre, we want people to come and celebrate. We want students and members of the community to show up. I’m always encouraged when I see a mix in the audience. You see students--this is part of their classroom now. And then you have people our age who just want to see theatre. You do start to recognize students in different roles--like professional actors--“Oh now they are doing this role. Okay, we saw them be young and cute and now they’re supposed to be middle aged and grumpy.” I’m always encouraged to see that. I don’t expect everybody to become an actor but just taking the base education in the art form and doing something with it is so important. I never did anything in radio and television with my radio and television degree, but what my education did was gave me the process to go forward. I’ve always looked at the product of School of Drama productions through that lens. The production doesn’t have to be great, but if it’s worthwhile I say, “You know what, I don’t need to see that show again, but I am glad I saw it.” You know there was something there for the students and I celebrated what the School does.

Randy: I didn’t come from a theatre background and so I’m frequently surprised seeing students do something that I had no interest in, or ability in, when I was in college. It’s fun to see the talent in the students that we’ve been exposed to.

Do you have a favorite School of Drama memory?

Randy: Working on the Jones Playhouse Theatre renovation, getting to be so interactive with the School of Drama, which planted a seed for me to continue. I would say that’s it.

Gary: I think a definite favorite aspect of our involvement was getting to know Sarah, because I think she embodied everything that a program would want. She had her own background in costume design, she was not going to be an administrator originally, but I think she knew the importance of stepping into her role and she did for 25 years. I think she was an important role model for lots of people and she made sure that we got involved as much as we wanted to. She gave us the opportunity to do lots of things and introduced lots of aspects of the program. That’s just sticking with us I think as far as what we can do to help this theatre program continue forward in the world. We designated the University as one of beneficiaries of our estate and a third of that gift will go to the School of Drama. And we know from working with Amy Scott in planning development that that makes a big difference to the School. It wouldn’t make as big difference in some other departments. We hope it gives opportunities to people who couldn’t have done something in Drama without our gift. We don’t need our name on it, we just want [future] students to know there is a scholarship that they can take advantage of. If that makes a difference to get you through to an education, then that’s all we ask.