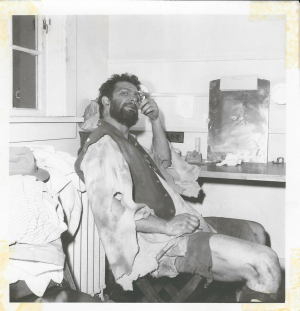 Several alumni shared with us their favorite memories, lessons learned, and advice & hope for future UW Drama students. Those submissions are excerpted here.

During her time at UW, Dori appeared in hundreds of shows. She was awarded the Glenn Hughes Acting Scholarship in 1945. One of her last shows was Molnar's The Swan, where she met Sgt. Matt E. Pelto (US Air Corps), a real cowboy from Montana who flew over 50 missions and received a Distinguished Flying Class for bravery. They were married almost 60 years when Matt passed away at 80 years old.

There are several that stand out: Really hold your vision and stay true to from your heart. Remember to have fun and play along the way. Keep going even when the going gets tough. You/we are of value.

That you stay true to your visions and dreams. That you can mold and shape them to bring ongoing joy and value to you, others and the world. That you continue to become your evolving greatest potential. And that the learning and experiences you derive from the program are ones that you can utilize to nurture your life and others in more ways than you've ever imagined.

I was sitting in the costume lab, creating masks for the upcoming production of Aristophanes' The Frogs, set to open the '61-'62 season under the School's new chair, Dr. Gregory Falls. The play had just been cast, and the frog masks were specific for each cast member (heads measured, etc.). Although acting was my “thing,” I had excelled in a class taught by Lance Davis, scenic arts & faculty member, the spring before—so I was “chosen” to make the masks. As I sat modeling the clay molds that would become casts, the door of the costume lab opened and in walked a tall, bespectacled, handsome boy. He walked over to Mr. Crider, (the Costumer Designer/Professor and academic advisor to all majors), to ask him a question about some class-or-other. When he walked out, I asked Mr. Crider, "Who IS that cute guy?" and he replied, "He is Jay Glerum, a new transfer student from Maryland." A year later Jay and I were married and enjoyed a marriage that lasted fifty-two years.

That they will have as good an education as I received, and will be able to have enough hands-on production exposure to be able to establish themselves in whatever capacity they choose. Even if they do not work in the field, the skills learned—such as teamwork, empathy, the value of hard work and self-discipline—lay the foundation for success in any field whatsoever.

Many productions as a regular member of the Penthouse Acting Company.  At one stint I did four or five performances a week for over thirteen months without a break. (The theatre then ran year around, nearly full time.) It was a learning experience not available anywhere else, and the face to face acting supported by Stanislavsky technique proved to be superb preparation for film and television work in New York. With the help of Prof. John Conway I was granted a Fellowship in a graduate program offered jointly by the Columbia U. School of Drama and Union Theological Seminary, where I worked for a year under E. Martin Browne, T.S. Eliot and Christopher Frye's director, in both London and New York.

How or why do you support the School of Drama?

The Drama School gave me, a kid who grew up in the poverty of the Great Depression, a university education which led on to Columbia U. and a Tufts U. graduate degree, network television, Off-Broadway, film, stage work in New England, Chicago, the Pacific Northwest, University professorships and the joy of a creative life.

Since I met my wife in Kenny Carr's class in 1964 that has to be at the top of the list. But it was also a great time for learning about Theatre for Young Audiences while also learning that the child audiences required and deserved the highest standards of theatrical skill and integrity.

I remember most my associations with Greg Falls and Duncan Ross. When asked, I proudly trace my theatre lineage from Ross back to Michael St. Denis to Vakhtangov to Stanislavski. And from Greg I learned that TYA was theatre—and needed to be better than adult theatre to really make a difference.

I'm not sure I have favorite memories but I do have some. I remember having classes with Professor James Crider and a number of other faculty members. I remember when Professor Greg Falls started ACT and a number of us design students were the initial designers for the first couple seasons. I remember Professor  Warren Lounsbury's class when he announced at about the 7th week of the quarter that he had already run out of the assignments that he typically included in the course and sort of gave us a choice of calling it a quarter or finding something else to do to finish the term. We all wanted additional projects. I also remember one day when classes were cancelled because of the earthquake. Unfortunately, I'd been driving to class and didn't even notice that there had been an earthquake.

My early-fall-start course with Valerie Curtis-Newton was memorable, for the simple fact it was my first college course. The small group and focused attention we got was a taste of higher level acting classes I would enroll in later. I will always remember the coaching and education I received from Valerie in the productions and courses I studied under her.

I hope that future School of Drama students continue to be enriched with a diverse variety of subjects. The technical requirements and history classes are valuable for a well-rounded education. I envision a department where talented faculty want to teach and direct and manage exciting new work and classics too.

How or why do you support the School of Drama?

The School of Drama is a small community within a huge public university. It is a unique combination to have access to such a high caliber of faculty, facilities, and material to work with—set within the environment of a renowned public university in a major metropolitan city. The results are incredible!

Working with the esteemed Mark Weill of Tashkent. He directed me in The Suicide. I also enjoyed working with Professor Steve Pearson on Noel Coward's Present Laughter.

"The lesson I remember the most was to "fail boldly."

If you are an actor of color, be proactive in seeking roles that you would otherwise not be cast in.

I fulfilled some of my costume shop hours as a dresser on the production of A Month in the Country.  The Playhouse did not have a washer and dryer, or any real costume space for that matter, and every day we had to lug all of the costumes back and forth across campus to and from Hutchinson Hall. Many times on those walks that seemed to take forever, juggling hangers of white shirts and bags of socks, I would shake a fist at the heavens and curse the outdated little Playhouse.

It wasn’t until I took Barry Witham’s Theatre History class that I began to really appreciate the Playhouse and respect its importance, not only to Seattle theatre, but also to our national theatre legacy. Through Professor Witham’s stories and discussions about the WPA’s Federal Theatre Project, original programs, and numerous original productions that happened at the Theatre, I realized that the Playhouse was so much more than just our odd little university theatre. It was a member of the community, a witness to history.

I played Barnadine in Shakespeare’s Measure for Measure directed by Duncan Ross. It opened at the Showboat Theater on March 1st 1963 and during Spring Break we took it on tour all over the state of Washington. During a show in Yakima (I believe it was Yakima) the stage had a low ceiling. Each time the guards came out to announce the entrance of the Duke, they raised their pointed spears and tapped the floor three times. When the play opens the Duke enters with Escalus preceded by attendants. One of the Attendants, Phil Tarro, Neil Towne, or J.B. Hall, thrust his spear up with gusto and it stuck in the ceiling. He couldn’t get it back down. I can’t remember how that ended but we were cracking up backstage.

In 1955, when I was a freshman majoring in drama at the University of Washington, classes were held in the dark upper level of Denny Hall. Drama students wore mostly black clothing and many behaved quite "dramatically." The next year when the new drama building opened with its light, airy rooms, the drama majors wore brighter clothes and behaved accordingly.

During the years I attended the U of W (1955-1959) Glenn Hughes was there supervising year-round performances at the Penthouse, the Playhouse, and the Showboat. His second wife, Cleta, appeared in a number of plays.

Glenn Hughes looked out for his students. I was performing in a melodrama at the Showboat, but I lived in a sorority, with no car, and had no choice but to walk across campus.  One evening I was accosted by a young man who strongly grabbed me by the wrist. My reaction was to pretend that nothing was wrong, so I said, "Hello." He released me and back away, and I hurriedly ran to the Showboat. I told the other gals in the dressing room about it, and when word got back to Glenn Hughes, he phoned the next day to say he had arranged for me to be driven to and from the Showboat from then on. Thank you, sir!

A number of people who were in the drama department in those years went on to become professionals in movies, on TV and in the theatre. These include Dorothy Provine ("It's a Mad, Mad, Mad, Mad World,"and "That Darn Cat" with Haley Mills, and her own TV series based in the flapper days of the 1920's); James Callahan ("Charles in Charge" and the M*A*S*H* episode entitled, "You Never Hear the Bullet"); Dawn Wells (Gilligan's Island"); John Farmer whose stage name was Frank Farmer; Marian Hailey, John Gilbert, Jacque Colton, Jerry Sando, and Jerry Lesch, to name a few. I have been in several episodes of Dick Van Dyke's series, "Diagnosis Murder" and an NBC Special with Pam Dawber entitled, "A Child's Cry for Help," plus little theatre productions locally. Storm Carrier was also a student in drama when I was. She married a descendent of Edwin Booth (brother of the infamous John Wilkes Booth) and for years she and her husband ran melodrama's at the Pink Garter Theatre in Wyoming. Pat Finley was a regular on the Bob Newhart show.

Congratulations on 75 years of The School of Drama. I wish you continued success.

A few tidbits from D.K. Sexson's time at UW Drama: