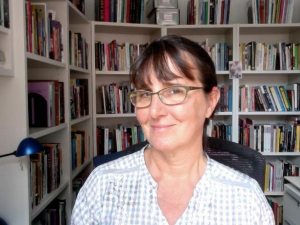 Extending a Hand: Gesture, Duration and the (Non)Human Turn

What are the limits of “liveness” in so-called live artwork? What is the duration of gesture? Thinking about call and response, or hail and acknowledgement, Schneider asks: How long can call lie in wait for response? How far can a hail extend? Schneider looks at mid-century art works emphasizing gesture and hands. She also considers negative hand prints at Paleolithic cave sites as well as the rock face itself to address questions of agency and “inter(in)animacy.” If hands are vehicles of extension, what is extended in extending a hand? If we can be done with the limits of “representation” what about the slippery skin of mimesis as rock touches (or enters) hand, hand rock? What are the vulnerabilities of geologic time in relationship to human time? Who performs? Who calls? Who responds?

Rebecca Schneider, Professor in the Department of Theatre Arts and Performance Studies, teaches performance studies, theater history, and theories of intermedia. She is the author of  Theatre and History (Palgrave 2014), Performing Remains: Art and War in Times of Theatrical Reenactment (Routledge 2011) and The Explicit Body in Performance (Routledge, 1997). She has coedited the anthology Re:Direction: A Theoretical and Practical Guide to 20th-Century Directing  and a special issue of TDR: The Drama Review on Precarity and Performance (2012) . She is a consortium editor for TDR, contributing editor to Women and Theatre, coeditor with David Krasner of the book series "Theatre: Theory/Text/Performance" with University of Michigan Press, and consulting editor for the series "Performance Interventions" with Palgrave Macmillan.

Organized by the Performance Studies Research Group, a Crossdisciplinary Research Cluster sponsored by the Simpson Center for the Humanities.