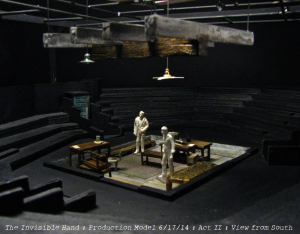 Every student in the MFA Design program takes a quarter to do a professional internship. Some students choose to work outside Seattle, but many remain in town. For Julia Welch and Jared Roberts, scenic designer students graduating spring 2015, they chose to stay in Seattle and have been working with UW alums Matthew Smucker (MFA ’02) and Jennifer Zeyl (MFA ’03), respectively.

The designers all agreed to sit down to chat about their projects, the internship experience, and their time at UW. It turned into a conversation that included discussion about director-designer dynamics and the shift in visual training brought on by the insurgence of digital media. Some highlights from the chat are excerpted here.

What are you working on and how is your working relationship set up?

Jen: I’ve had UW grad students in their professional quarter approach me before, but the timing has never worked out. When Jared approached me, I had the Angels in America project, which is going to be huge, and I knew if an assistant slowed me down for a second I would just cut them. Jared started coming in to work once a week, and from week to week he actually remembered the things I was telling him. It was stunning. I’ve never had an assistant who could draft. Jared ended up doing the drafting and I did the model making. During spring quarter, he began working nearly full-time and started coming to the design meetings. When the positions for Technical Director and Master Stage Carpenter opened up, I hired Jared. It has been the most thorough and comprehensive relationship between design and build that I’ve ever experienced. Plus, Jared gets to fly Marya [Sea Kaminski, PATP ’04, playing The Angel].

Jared: I get a lot of resume lines.

Matt: It will look like you self-produced your own Angels in America! Julia has been assisting me on Ayad Akhtar’s The Invisible Hand for ACT, which has only been produced once before. There was a one set of challenges that went away from the original draft I started reading, and a whole different set of challenges that appeared in the new draft. Julia has been coming to design and production meetings with me and I’ve used her for research and model-building. In some ways, I feel sorry for Julia because I haven’t been able to show her a real combative director process! [Director] Allen Nause has been very agreeable and pleasant, and has gone with a lot what we initially put out there.

Julia: I’ve enjoyed seeing how you set up your studio and what tools you have on hand. That’s not something we get to see in an academic setting. The most valuable part for me was going to the meetings and seeing how Matt presents his ideas; what he talks about and how he talks about it in a way that is clear and put-together.

Matt: And that’s certainly something I remember from my internship. I was a studio assistant, but I didn’t go to meetings, and I think that was a lost opportunity.

Jen: Matt and I both did our internship in New York. I wasn’t privy to a lot of the director-designer conversations. Sitting at the table and being able to focus on how the interactions were happening would have benefitted me a lot. It’s one of the reasons I’ve had Jared at every design meeting.

Jen: You can draft like a god and you can make the most beautiful models, but if you can’t have a conversation with a director, you will never ever work.

Matt: It feels like there’s a ripe opportunity for a greater sort of ladder for designers than is really being utilized here.  I think there’s room for the design community to grow. I’m not interested in being one of those designers that shuts out the people coming up from behind.

I think there’s room for the design community to grow. I’m not interested in being one of those designers that shuts out the people coming up from behind.

Experiential learning and internships are incredibly important, and you learn a lot very quickly. Why is the MFA degree still relevant?

Julia: I didn’t have a lot of the skills I wanted to have. I came out of a very general undergraduate program. Some of the model-building, drafting, and the practical skills of communicating ideas were things I didn’t have. The quickest way to get all the information I needed was through an MFA program.

Matt: I was working in Seattle [as the Prop Master at Intiman] when I decided to go back to school. School was a great way to take myself out of a theatre community and then reintroduce myself into that theatre community. I felt like I started working very quickly when I came out of the graduate program. People I had worked with prior to going back to school were very generous and wanted to have me come back and be part of what they were doing. Bart Sher, the Artistic Director at Intiman, for example, recognized that there was something important about going away and choosing to do something, and he wanted to continue our relationship at Intiman. The MFA was a certification for jumping up to work on a regional level. And with an MFA you can teach.

Jen: I had been painting scenery at the Long Wharf Theatre in New Haven, Connecticut. I watched the charge painter, Keith Hyatte, have double carpal tunnel surgery and suffer two personal tragedies, and I watched him be unable to spend the time – and be unable to spare the time in the production schedule –  to go and take care of himself. He was the one who encouraged me to go to graduate school. I really went to grad school to make Keith proud. And he’s pretty proud. So, check that off the bucket list.

Jared: I had a bit of experience in this and that, but I wanted to fine tune it. I lacked a lot of the artistic side of design. I came from a very practical background. The script says you need a table stage left and that’s where I put the table. Going to grad school sooner rather than later was the best option for me. I also wanted to have that ability to teach that an MFA gives you.

Jen: A lot of museums. And getting outside. I have a ton of friends in the visual arts community, so if they’re doing some installation or some nighttime photography shoot in an abandoned flour mill, I’m in the front row. I get a tremendous amount of inspiration just by going to Seward Park, walking around for two hours, getting enveloped by different stimuli. I don’t have to make a lot of decisions and in that time my brain starts to regrow.

Matt: Sometimes when just walking downtown between Cornish and my car, I’ll see something that causes a shift in thinking. Getting out to a museum or gallery or anything that’s not the theatre or your studio allows an opening where something else can come in.

Jared: To get out my head, I turn to video games, comic books, and movies. It allows me to completely turn off the art and escape and then I can come back to it with a fresh mind. To get inspiration, I’m always looking at everything, wherever I’m at.

Julia: Anytime I can be active. Anytime I can go for a run. Even working in the shops; doing something physical to get out of my head. I have a drawer full of images I’ve saved because they caught my eye, but I had no use for at the moment. There are some studio weeks when I’ve got nothing and I just look through that drawer, and suddenly something applies and it starts me off on a different path.

Jen: The increase in the accessibility of visual information has changed things. I remember being in the second year of grad school and a classmate showing up with all these totally non-topical, not beautiful, lighting photos, and he explained to me what a Google image search was, and I was like, “That kind of sounds like cheating.” I find myself having to teach students visual acuity; to turn off their screens and to look at the sidewalk and to ask what is the story being told through this sidewalk? How do you know? What’s locating you’re here? What assumptions would you make about the people who inhabit this space? The next generation of designers is visually trained in a totally different way.

I find myself having to teach students visual acuity; to turn off their screens and to look at the sidewalk and to ask what is the story being told through this sidewalk? The next generation of designers is visually trained in a totally different way.

Julia: It’s interesting to hear your talk about observation because I find that I’ll walk around and when something catches my eye I’ll always pull out my phone and take a photo of it. The first thing I do is turn it digital instead of taking the time to really implant the image in my head. I’m like, “Oh, I don’t want to forget that.” Take a photo.

Jen: You’re choosing to not trust your mind and your experience of what you’re seeing. You’re not allowing any of it to absorb and to take away what sticks.

Matt: That sense memory – those small fragments – from the experience are what translate into the experience on stage more than simply duplicating something that would be better on film.

Jen: So much more theatre is trying to do what film has been doing because, I honestly think, the next generation of theatre-makers are much more strongly influenced by film than they are by theatre, or by art, or by psychology, or by script analysis.

Jared: Could be cool.

Be sure to see the fruition of their work on stage: Angels in America runs August 12 thru September 21 and The Invisible Hand runs September 5-28.