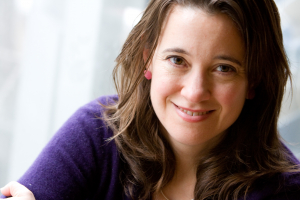 “A playwright picks out images. A playwright can talk to someone for ten hours and get a really good story out of them. There are probably a lot of people who can do that – a therapist, a sociologist, a journalist,” muses playwright Karen Hartman, new Senior Artist in Residence at the University of Washington School of Drama. She continues, “A playwright is then going to pull out the images and string together a distilled narrative. It won’t cover everything, but it will give the audience a sense of who that person is.”

Karen’s current projects all have their foundations in documentary sources. These three distinct plays are perhaps coincidentally connected thematically, but purposefully connected by Karen’s selection of source material type. The first project, The Book of Joseph, was commissioned by the Chicago Shakespeare Theatre and is scheduled for production there in 2016. The commission was inspired by a collection of letters written between 1939 and 1941 to Joseph Hollander, a young Jewish man who had escaped Poland. The letters, published as a book, Every Day Lasts a Year, were from Hollander’s family, left behind in Krakow, and were rediscovered by his son, Richard Hollander, many years later.

“There were these three generations of really interesting men, and I wanted to write about all of them and not just use the letters,” Karen explains. “I started the project by interviewing the family and creating these sort of parallel documents. I had the original documentary sources – the letters – and then through interviews I had another set of documents that I could draw material from.”

“I’ve been writing plays since my teens, but this project expanded the possibilities for material,” says Karen, “Memories and things I didn’t live through, but I could sit and listen to people who did and construct a story that they couldn’t construct for themselves. That experience of going back and forth between the interviews and the writing got me hooked on this type of work.”

“I’ve been writing plays since my teens, but this project expanded the possibilities for material. Memories and things I didn’t live through, but I could sit and listen to people who did and construct a story that they couldn’t construct for themselves."

Those plays Karen has been writing since her teens have earned her awards and fellowships from the Rockefeller Foundation at Bellagio, the National Endowment for the Arts, Princeton’s Hodder Fellowship, the Helen Merrill Foundation, MacDowell Colony, the O’Neill Playwrights Conference, a Daryl Roth "Creative Spirit" Award, a Joseph A. Callaway Award from New Dramatists, the Voice & Vision Retreat, a Jerome Fellowship, and a Fulbright Scholarship. Karen currently holds the Playwright Center’s 2014-15 McKnight Residency and Commission for a nationally recognized playwright, and the School of Drama is thrilled to welcome her to its faculty this fall. Additionally, she was one of three playwrights selected to join Seattle Rep’s Writers Group for the 2014-2016 cycle.

“We have a writer back in the building,” says Valerie Curtis-Newton, professor and head of MFA performance. “It’s fundamental. A large part of what we do is interpret the work of a writer. For a long time we’ve struggled to get our students to read more plays and understand how they work. Karen’s insight into that is invaluable. And she’s really cool.”

In winter quarter, Karen will be teaching a documentary theatre-making course to the first year MFA students; a course in which the students will be required to go out into the larger community to make work. She’s looking forward to being able to think about what she’s been doing for the last three years: to exploring the principles involved in going out into a community to make theatre and seeing how the students employ those principles to do something perhaps completely different.

The other projects making up Karen’s new body of documentary work are very much rooted in the communities in which the theatres who commissioned the works are located. The first of those is a commission from Philadelphia’s People’s Light & Theater Company. Six playwrights were selected for People’s Light New Play Frontiers, an initiative dedicated to exploring “American identity through stories of deep meaning to specific populations in the five-county region” surrounding People’s Light theatre. When Karen was selected, she knew she would draw on an observation component and an interview component to write her play.

“It feels really smart of theatres to think very locally,” says Karen. “It seems to me that in a regional theatre system there’s an opportunity to be local. You’re not asking audiences to come see what’s important to you. You’re figuring out what is happening and what is locally important and you’re making a piece about that.”

“It seems to me that in a regional theatre system there’s an opportunity to be local. You’re not asking audiences to come see what’s important to you. You’re figuring out what is happening and what is locally important and you’re making a piece about that.”

Similarly, the third project, commissioned by Yale Repertory with Long Wharf Theatre’s Artistic Director Gordon Edelstein, will take real, recent, and divisive events and put them onstage in the community in which they occurred. Karen is in the process of interviewing the New Haven firefighters and the lawyers involved in Ricci v. DeStefano, a polarizing employment discrimination case that went before the Supreme Court in 2009 and ultimately has repercussions on the future of affirmative action across the country.

“I’m learning from the people that I’m talking to what the important story is. I’m not coming in and deciding; I’m listening for it,” Karen reflects. “Then to make the work, I use that determination of importance as an ordering principle to make sense out of all the footage.”

We have a writer back in the building indeed.