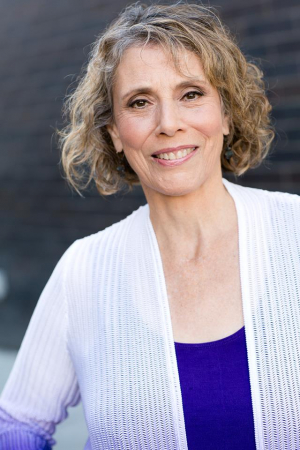 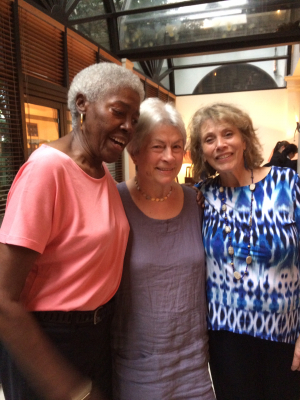 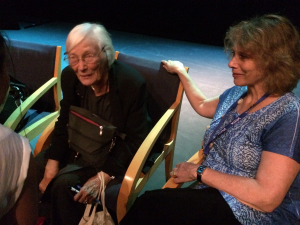 Judith Shahn, Senior Lecturer in Voice and Dialects at the UW School of Drama, has been a leading voice specialist in the Northwest for the last twenty five years. Her innovative approach to dialect training has been documented in the Voice and Speech Trainers Association's publication "Essays in Voice and Speech." An actress and director as well, Judith has coached dozens of productions at the Seattle Repertory Theatre, Intiman, ACT, as well as the Oregon and Utah Shakespeare Festivals. Most recently she coached Intiman's 20th anniversary staging of "Angels in America." She coached Intiman's original production 20 years ago. In this blog post, Judith reflects on the annual VASTA conference.

This past August, I attended the 2014 Voice and Speech Trainers Association (VASTA) Conference in London. As a VASTA board member, I am required to go, but this was a conference not to be missed! I have been a VASTA member for the past 27 years, and a board member for three years. I am also the board liaison to The Diversity Committee. Part of the Diversity Committee’s mission is a new format at the conference called “The Identity Cabaret,” which I’ll talk about below.

This conference, held at The Royal Central School of Speech and Drama was truly one of the memorable ones. Voice and Speech trainers from 16 countries attended and presenters included:

The highlight of the conference, for me, was introducing my mentor, Kristin Linklater, before she gave the keynote address. It was rather daunting speaking in front of an audience of voice and speech experts. My mission, as a Designated Linklater teacher, was to talk about what Kristin has meant to me on a personal as well as professional level. Kristin is most known for her book, Freeing the Natural Voice, which is used in theatre training programs around the world. I first met Kristin in 1987 at a voice and Shakespeare workshop. I had been exposed to her work briefly as a student and was already a voice teacher at Cornish College of the Arts. Meeting her in person was so inspiring – I knew I wanted to train to become a Linklater teacher and began pursuing a three year course, which resulted in my designation.

In my introduction, I spoke about Kristin as a mentor, an investigator, and an inspirer. As a teacher, she is constantly re-examining her own work. She never rests on her own success. She continues to teach all over the world. Kristin’s latest dream has manifested into the Linklater Voice Centre on Orkney Island, Scotland, where she was born and raised. After fifty years changing the nature of voice training in America and around the world, Kristin has returned to her native land. Do click on the link for more information.

Also on the platform was Cicely Berry – my other idol in the voice world.  VASTA honored Cis for her decades of voice innovation and text coaching, for the Royal Shakespeare Company and beyond. Her books on Voice and Text are classics in theatre training: Voice and the Actor and The Actor and the Text.

The Diversity Committee's initiation of “The Identity Cabaret” allowed anyone to perform a five minute piece inspired by one’s identity. “Identity” was a broad springboard and each VASTA member was allowed to define it on their own terms. I wrote a piece about the meaning of my Jewish heritage. Now that my parents are both gone – What are the traditions that have been passed on to me? The theme of my piece was “defiance.” I was named after Judith in the Bible, who defied Holofernes and rescued the Jewish people. I also told the story of my cousins who were part of the Bielski partisans who rescued Jews in the forest of Belarus during the Holocaust. I wanted to change the all too accepted view that European Jews were merely victims during this horrific time. There were plenty who fought back.

It was wonderful to have the opportunity to perform something I wrote. It also provided me the opportunity to experience the same challenge presented to our Professional Actor Training Program students in their second and third years of training at the UW. I felt the profundity the students must feel to be the sole performer and to tell a story that is often deeply personal and of their own making.

It was wonderful to have the opportunity to perform something I wrote. It also provided me the opportunity to experience the same challenge presented to our Professional Actor Training Program students in their second and third years of training at the UW. Each student has two opportunities to write or adapt a solo show of their choosing. The culmination is their thesis for the MFA in Acting. Although my piece had no production values, I felt the profundity the students must feel to be the sole performer and to tell a story that is often deeply personal and of their own making.

VASTA has a tradition of ending the conference in song. Over the years, I have been asked to act as song leader because of my CD, Sing Together, which teaches people how to lead ensemble singing in parts and harmony. I wanted very much to do a tribute to the late Pete Seeger. Many younger people are not familiar with Pete's tradition of getting everyone to sing. He was an inspiration for the labor movement, the civil rights movement and the environmental movement. My colleague, Claudia Anderson, led the iconic “If I Had a Hammer” and I led “Wimoweh.” 250 people singing together was uplifting indeed! Pete would have been proud.