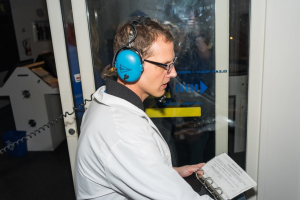 Magelssen readies a space probe for deploying with his counterpart back at Mission Control.
View gallery

When we last heard from School of Drama Associate Professor Scott Magelssen he had just returned from Norway’s Kon-Tiki Museum, pursuing his research on performative reconstruction. Scott’s current research is on interactive performance events in which participants are immersed into live, simulated, experiential environments and take on active roles in those environments. In this blog post, Scott’s research takes him all the way to space.

As our crew approached Mars, I worked carefully with my colleague Josh back at Mission control to assemble the space probe. I had the probe laid out in front of me in the airlock, its tangle of wires and components a big jigsaw puzzle, while Josh read me the assembly instructions over my headset. Though neither of us had all the information, and Josh could see me on his monitor but I couldn’t see him, we were doing a pretty good job preparing the probe for launch.

That was when the red emergency lights started flashing in the spacecraft’s cabin, warning that our oxygen was running out, and I saw my crewmates take on frantic expressions at their own workstations. Suddenly, it became exponentially more difficult to concentrate on my task.

We weren’t on a real space mission, of course. I was participating with a group of UW Museology grad students in a simulation at the Challenger Learning Center, which just reopened at Seattle’s Museum of Flight. Two days before, I had visited Seth Margolis’s Museum Education class to talk about my own research on live immersive simulations (I use “simming” as a shorthand) like the one above. Seth, who is Director of Education at the Museum of Flight, invited me in turn to join his UW class as it experienced the Challenger Learning Center’s debut that week.

The Voyage to Mars mission featured a mission control room and a mock spaceship, each with instrument panels and computer screens, and we even wore NASA costumes. Each of us played a role, and participants worked together in pairs, with one in space and the other back on Earth, to accomplish the tasks we needed to successfully make it to our destination, not to mention stay alive (our group did make it to Mars, thanks to my colleagues getting the emergency air supply to kick in). While we may not have learned actual astronaut science, Challenger Learning Center Coordinator Melanie Kwong explained in the debrief afterward, we did get some collaboration skills and problem solving experience, which makes museum programs like this, which use some of the same techniques as theatre, adaptable for groups from elementary school field trips to corporate team retreats.

While we may not have learned actual astronaut science, we did get some collaboration skills and problem solving experience, which makes museum programs like this, which use some of the same techniques as theatre, adaptable for groups from elementary school field trips to corporate team retreats.

The UW Museology Program and the School of Drama are taking advantage of these intersections between museums and theatre. My visit to Seth’s class, and his hosting me at the museum in turn, were just a start. Last year Museology invited me on to its Interdisciplinary Faculty Group roster, and this spring I will be teaching a Museology course in Museum Theatre and Performance. Museology students who are working to become curators and programmers will learn more about how museums are adopting performance into their programming and they will design their own experiential programs as a capstone project for the course. The course will be open to Drama graduate students, too, who can learn about how strategies from their own field are being adopted and applied in non-traditional venues. And the undergrad and grad students in the School of Drama and the Center for Performance Studies are already learning about the ways museum performance takes on issues of history, culture, and politics, as well, from undergraduate Drama seminars like “Performing the Past” and “Adaptation,” to graduate seminars like “Documentary Theatre” and “Foundations in Performance Studies.”

As we build upon these relationships we look forward to even more interesting and productive collaborations between museums and theatre!

Scott Magelssen is Associate Professor in the School of Drama and Center for Performance Studies at the University of Washington. He is the editor of Southern Illinois University Press’s Theater in the Americas book series. His book Simming: Participatory Performance and the Making of Meaning was published in Spring 2014 by the University of Michigan Press, and he hosts the website theater-historiography.org with Henry Bial.

Click here to learn more about the Challenger Learning Center at the Museum of Flight.

All photos in the gallery by Dominic Arenas.