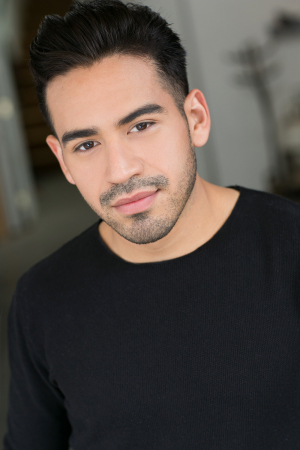 Moises Castro (Professional Actor Training Program Class of 2016) knows a thing or two about figuring out—and going for—what you want. This spring, he will earn his MFA from UW School of Drama. It’s not his first master’s degree. In addition to a BFA in Acting from the American Musical and Dramatic Academy, Moises also holds an MA in Educational Theatre in Colleges & Communities from New York University.

After earning his BFA, in addition to auditioning and doing commercials, Moises taught in the drama program at a Los Angeles high school before moving to New York for graduate studies at NYU. His professors there recognized his potential as a performer and recommended that he pursue an MFA—and as a physical performer, one professor specifically recommended UW.

During his last year of training, Moises has gone after multiple extracurricular activities, including directing a student-produced run of Pippin. Here, Moises answers a few questions about his time in Seattle and at UW Drama.

How was teaching undergraduates different than your experience teaching high schoolers in LA?

It was cool to be a little freer with thoughts and ideas, but it’s hard to teach drama. In our career we’re digging into emotions. Undergrads are a fresh group—people who are barely getting to where they find out who they are. As a teacher, how can you help instead of making them go more inside?

You took on Pippin, a big project, at the beginning of your final year of grad school? What motivated you to direct a student-produced show?

I’ve always had the desire to direct. I saw the opportunity and thought that while I had the resources and people willing to be a part of it, I should do it. It started as a small thought, and then I said that thought out loud. I think there’s nothing like owning your own thing and it seemed important to start something that gave PATP students access to their own space. I thought, if I do this, maybe more people will want to do their own stuff too.

I think there’s nothing like owning your own thing and it seemed important to start something that gave PATP students access to their own space.

Does your training in educational theatre influence the work you do now, or want to do in the future?

I’m a better actor because I did of the NYU program. I think it made me a stronger person and therefore a stronger actor. My classmates were from all over, so we always shared stuff that was very different. We also got to go abroad. I shared theatre with communities in Ireland and Uganda. What I still feel like I lack, when it comes to community-engaged theatre, is the ability to speak to and be heard by a big group of people. I’m continuing to make myself as well-rounded as I can be in order to be able to unite a group of people.

I’m at a moment where I’m still discovering why I do what I do. I feel very selfish for the reasons I act, but I think in the end, if I do my best, I think the theatre will change people. Let me do my best performance and let the audience take it with them. Right now, I act because it’s a lot of fun. I get to be a part of myself that’s in there, but doesn’t always get out. I get to not be shy.

I feel very selfish for the reasons I act, but I think in the end, if I do my best, I think the theatre will change people. Let me do my best performance and let the audience take it with them.

Another project you took on was acting in Washington Ensemble Theatre’s production of The Motherfucker with the Hat, directed by Valerie Curtis-Newton. What was that experience?

I had gone down to LA after spring quarter ended and while there I booked a commercial. The fitting for the commercial was on a Friday. After the fitting, I drove my car back to Seattle because I would need it for rehearsals at Intiman starting the following week. I got to Seattle and bought a flight to go back to LA on Sunday. Did the commercial shoot on Monday and flew back to Seattle on Tuesday morning. I auditioned and they called me that night to give me a role. I felt like such an actor, but was also like, “Is this really what I want to do?” That’s what it may be like eventually, but I think if you really want it you get after it.

Was there anything about graduate school that surprised you?

It surprised me the amount of space they give us to get it. The professors let us discover whatever it is we’re discovering on our own. They are here to guide you and to give you the form. It’s up to you to let it go into you and see what it does.

Do you have a favorite moment?

My favorite show experience was playing Sir Tobey in Twelfth Night. The environment in the room was just so much fun. That was also the show where I was the most tired I’ve ever been in my life. I was also teaching and had a role in a directing project. In Twelfth Night, I went up and down the stairs of that set a lot. One day, during tech, I got to the top and I told Leah (Adcock-Starr, director and MFA class of 2015), “I am so sorry, but this is the last time I can do this for you.” I thought I was going to pass out. Grad school is definitely a test of whether this is what you want to do or not because you will have those long days.

I’ve been cast in PearlDamour’s final installment of The Milton Project. After that, most likely I’ll be moving to LA. I really want to do television and I think there is a lot of opportunity for me right now. I’m excited about that. LA is my home, so it’d be nice to be there. I might also go after part-time work as a drama teacher or in a theatre’s educational outreach department.