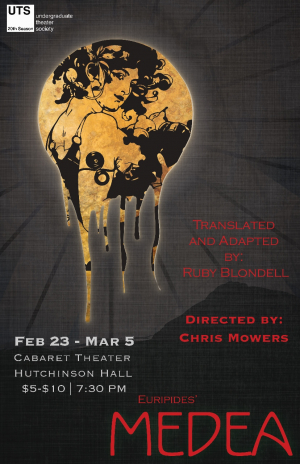 UTS opens its fourth show of the season in a little over a week. Come check out this new adaptation of Euripides' classic tale of love and loss by UW Professor of Classics, Ruby Blondell.

Foreigner. Woman. Outsider. When Medea abandons her father's house and leaves her homeland, she does so urged on by her love for Jason and his oaths of loyalty to her. When those oaths prove false, love turns to hatred and married bliss turns to bloody revenge. This is the story of what happens when an extraordinary woman finds herself forced to take action against a system which denies her agency based solely on her gender and her nationality. With sentiments that resonate as surprisingly modern and topical in a volatile political climate, Euripides invites us to examine the consequences of a woman, an immigrant, breaking out of the role which a patriarchal society has forced her to play.