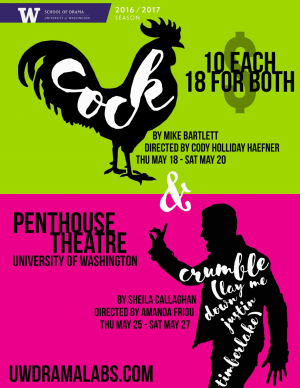 Poster for Cock and Crumble

Cody Holliday Haefner and Amanda Friou, our two first-year MFA directing students, will be making their School of Drama directorial debuts with Cock by Mike Bartlett andCrumble (Lay Me Down Justin Timberlake) by Sheila Callaghan, respectively. This two week festival of contemporary one acts runs May 18th through 27th in the Glenn Hughes Penthouse Theater.

After seven years with the same man, John is starting to feel a bit claustrophobic. But when he and his boyfriend decide to take a break, John surprises himself by falling in love with a woman. As both partners vie for his attention and affection, John is forced to make a choice about his relationship and identity. Called “uproariously funny” by New York Magazine, Cock is an investigation of the nature of love, sexuality, and the expectations of society.

Crumble (Or Lay Me Down Justin Timberlake)
By Sheila Callaghan
Directed by Amanda Friou
May 25-27
Thu & Fri at 7:30pm, Sat at 2:00pm & 7:30pm
Glenn Hughes Penthouse Theatre
The Apartment has fallen into disrepair…and he’s not happy about it. As Mother channels her anxiety and grief over the death of her husband into elaborate cooking rituals and 11-year-old Janice hatches a dark plot with her dolls, The Apartment kvetches endlessly, longing in one moment for his occupants’ caresses and in the next for their deaths. But Janice and Mother are focused on their own longings, which take the form of Justin Timberlake and Harrison Ford, respectively. And then there’s the sister with 50 cats. The LA Times called Crumble “[a] sweetly audacious parable,” adding, “Ionesco never blended absurdity, terror and sentiment more strikingly.”

Tickets are $10 per show, or $18 for both and can be purchased in advance through ArtsUW. Tickets at the door will be cash only.