Live from the School of Drama! March 2017 News

The halls are quiet as students study furiously and prepare for the end of the quarter. But in addition to finals, essays, and planning for spring break, they are also singing, dancing, and preparing to open the UW Musical Theater Program's third annual musical, Pippin! Read on to learn more about this exciting musical epic, discount tickets for the Seattle Repertory Theatre, and an exciting announcement about Professor Valerie Curtis-Newton. 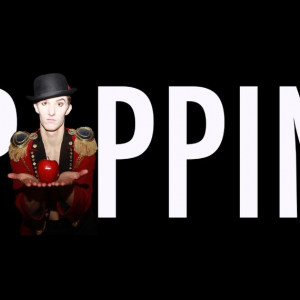 “This production engages heavily with the issues of today,” says Mendieta. “We are not changing any of the material, all the original text is there, but we are placing it in a modern context. It’s amazing how relevant the play continues to be 45 years after its creation.” The production examines the power of choice, Mendieta says. “This play looks at the power of individuals to forge their own paths. And it asks, after encountering the darkness of the world, is there hope at the end of the tunnel? And does the human spirit prevail?”

Tickets are selling fast and some performances are already sold out, so be sure to grab yours soon! 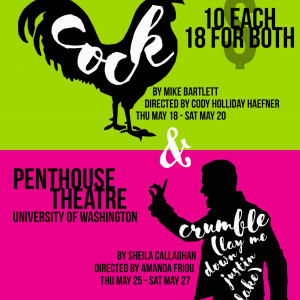 Cody Holliday Haefner and Amanda Friou, our two first-year MFA directing students, will be making their School of Drama directorial debuts with Cock by Mike Bartlett andCrumble (Lay Me Down Justin Timberlake) by Sheila Callaghan, respectively. This two week festival of contemporary one acts runs May 18th through 27th in the Glenn Hughes Penthouse Theater.

After seven years with the same man, John is starting to feel a bit claustrophobic. But when he and his boyfriend decide to take a break, John surprises himself by falling in love with a woman. As both partners vie for his attention and affection, John is forced to make a choice about his relationship and identity. Called “uproariously funny” by New York Magazine, Cock is an investigation of the... 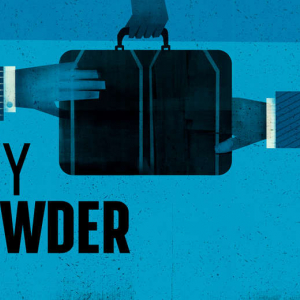 Join us on March 31st for a special evening at the Seattle Repertory Theatre to see Sarah Burgess' Dry Powder, directed by UW School of Drama alumna and Seattle Repertory Theatre Associate Artistic Director,  Marya Sea Kaminski. Marya, who directed our production of Iphigenia and Other Daughters in the fall, will be making her Seattle Rep directorial debut with this razor-sharp play about the price of success in our modern American economy.

Please join us on Friday, March 31st to celebrate Marya's work and attend the production for only $15. At 6:30pm we will be hosting a pre-show reception in the Benjamin Moore Spirits lounge with snacks and a cash bar. Then, join us for the performance at 7:30pm in the Leo K. Theatre,... 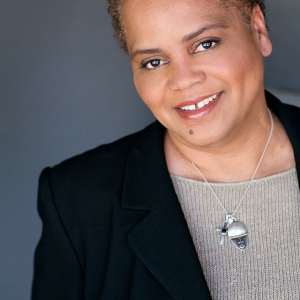 On February 20th, Valerie Curtis-Newton—MFA alumna, School of Drama professor, and Head of the Acting and Directing Masters Program—was awarded the prestigious Artist Trust Innovator Award. Professor Curtis Newton will receive $25,000 in unrestricted funds, funded by the Dale and Leslie Chihuly Foundation. This prize is awarded to Washington State artists from any discipline who are pushing the boundaries and redefining the work of their field.

The Artist Trust press release talks about the ways in which Professor Curtis-Newton is an innovator in the field of performance and her journey into new territory. "Primarily known for her directing and producing, Valerie is making a career transition, moving towards writing immersive theatre, and becoming more of a generative artist. As a generative artist, her current interest is in African American artists in immersive work, an arena through which their stories are rarely told." 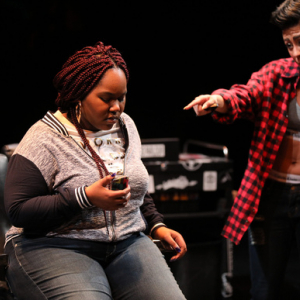 Ben Gonio (PATP '05) appeared in a co-starring role in season three of TNT's "The Librarians."

Jessica Martin (BA '08)  is in the process of writing, producing, directing, and acting in her first feature film, Abby and Tabby: Alone in the Desert. Learn more about it here!

Andre G. Brown (PATP '18)and Allyson Brown (PATP '19) are currently performing in Milk Like Sugar at Arts West. The show was directed by Malika Oyetimein (MFA'17)...