Undergrad director Jake Lemberg on directing Wolves and the power of love, trust, and "accomplishing nothing" in the rehearsal room 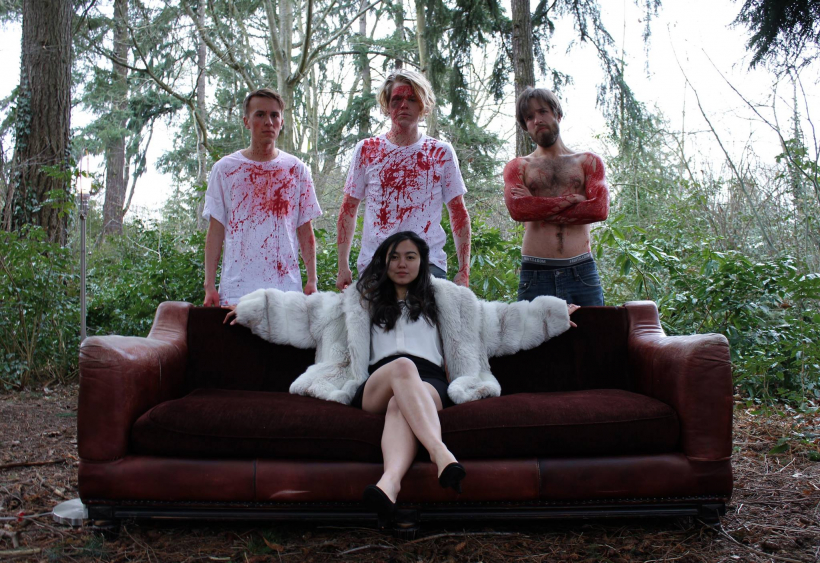 Editor's Note: The Undergraduate Theatre Society produces a full season of shows in the Cabaret Theatre. This work is curated, produced, directed, designed, and performed exclusively by undergraduates for the entire community. To learn more about UTS, please visit students.washington.edu/uwuts/.

Recently I have found myself questioning why I pursue theater. Why have I given it so much of my time? What is the point of pursuing this? I think have found the answer throughout the process of directing Wolves.

Beginning this process, I knew I wanted it to be something different. I wanted it to be memorable, worthwhile, and meaningful. In the end, it’s up to the cast and crew to decide if I was successful. Nonetheless, it has been a journey that has at times felt triumphant, and other times quixotic.

The idea behind the process of Wolves is rooted in a foundation of love. I believe the quickest path to success is to surround yourself with the warmest and most loving people you can find. I am lucky to have found that in the cast and crew of Wolves. They are talented, empathetic, and kind. Each one of them brings a unique asset to the production that we would have sorely missed if they had not joined the team. Olivia Hagan for example, is a freshman here at UW. She saw a posting for Wolves and, although she did not know how she wanted to be involved, she knew that she wanted to be a part of it. She joined our team that week as a floating member of the production team and is now our Assistant Stage Manager. She is one of the kindest and most genuine people I have met at UW, and this show would not be the same without her. This could be said about each member of our team, and I would love to spend hours writing about what I love about each person I get to work with, but I think their work speaks for itself.

Toward the beginning of the process, there was a moment when, while working on an intense scene, it became clear we had exhausted our energy for the day. I had stepped out of the room for a moment and when I came back Ashley Lobao (Narrator) was running the scene with Willy Picton (Ben) and Colin Kolbus (Jack). Ashley had put her arms through Colin’s, and was performing as his arms. The production team was enjoying themselves, the actors were clearly enjoying themselves, and I realized that I did not want to be anywhere else in that moment. I simultaneously realized we had been approaching the scene entirely wrong. It was a much lighter scene than I had previously thought and I changed direction after that rehearsal. That is the value of this process. If you trust your team, and allow love to be in the room, great things happen.

As we know, the nuances of interpretive art are a far cry from an exact science. But what does this process look like? It's strange. It involves a lot of flexibility, trust, and the willingness of a cast and crew to try new things. We start rehearsals by talking for as long as we need to, about whatever needs to be said. If I come into rehearsal bearing a burden, I share it with those around me. The conversation goes as deep as it needs to about whatever it needs to be about. We share our days, we laugh, we exchange uncomfortable silence, but most importantly: we connect. Every day we take a few steps further from being strangers and get a few steps closer to something more familial.

The rehearsal period itself follows a somewhat similar winding path. The time is spent pursuing the emotional needs of those involved. If someone is definitely not in a place to run a scene ad nauseam, we don't do it. If a scene isn't working we will try running it in absurd ways.That could mean we do the scene scored by a TV Sitcom sound board, or turn off the lights and play music. It all depends on the emotional needs of the cast. During these times I look around and I remember why I do this. These moments are full of so much life and joy. It often occurs to me that the humanity in these moments is much more honest than the humanity we simulate on stage.

This process has been strange. It’s definitely not conventional, and I’m sure it doesn't sound productive. To be honest, most days it isn't. Most days we float through the rehearsal and at the end of it I couldn’t name one concrete thing that we've accomplished. But not all things worth doing can be defined. What can’t be defined is all the times where we share moments of our lives. The moments when we laugh together, sing together, and exist together. These moments bleed into the work and allow room for impulses, bolder choices, and a sense of security among the ensemble. This is imperative when tackling a show like Wolves.

What is the result of this process? I am not sure. It’s untested and the results won’t be known until the dust has settled on closing. What I do know, is that I am passionate about the people around me. I am in love with love, and spreading it is the mark that I want to leave on this school. I want those around me to be elevated, I want the people involved in this show to feel that every second they spend in the rehearsal room helps them on their journey, but most importantly I want to end the idea that product is the focus. I choose people. I choose connection. I choose love.

Wolves
Wolves is the story of Ben and Jack, ex-lovers turned roommates. When Jack brings home a strange man, Ben’s psychosis spreads and the Narrator struggles to keep a lid on the ensuing violence. Wolves uses the classic tale of Little Red Riding Hood to critique our modern views on the inexplicable dangers of fear.
Now through April 23
Cabaret Theatre, Hutchinson Hall
Tickets $5 - $10
Click here for tickets
Note: this show contains graphic depictions of sex, violence, and assault. Recommended age is 13+