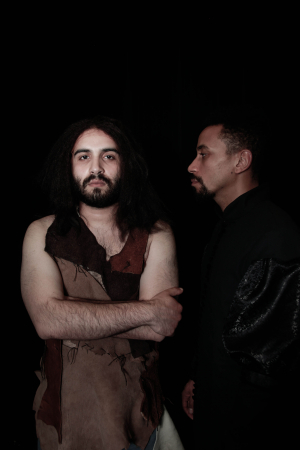 Adrian Tafesh as Segismundo and Allen Miller as Clotaldo. Photo by Mike Hipple.

Up next on the School of Drama main stage is Sueño, translated and adapted from the play La Vida es Sueño by Pedro Calderón de la Barca by José Rivera and directed by Book-It Repertory's Co-Artistic Director, Jane Jones. The production runs May 26th – June 4th at the Floyd and Delores Jones Playhouse.

Believing his infant son, Segismundo, to be cursed, King Basilio banishes him to the tower for life. When the prince is finally released at age 25 to claim his birthright, it becomes clear that his solitary upbringing has turned him into a monster. In a script that teeters between the absurd and the sublime, Rivera deftly weaves Calderón’s grand poetic riffs with deliciously jagged contemporary humor, pulling this classic story of a distrustful, incompetent ruler into the present day.

This production of Rivera’s highly accessible adaptation is a rare opportunity to engage with one of the most important—yet least produced—plays in the canon of classical theatre. Expect swords.

Featuring a cast of PATP and BA actors, this thrilling and though-provoking period piece brings our 76th season to a close. Tickets can be purchased here.