From now until the end of the school year, we will be introducing and celebrating our graduating MFAs, looking back on the work they've done during their time here, and sharing their reflections and wisdom as they head off into the professional world. Our series continues with graduating PATP actor Bridget McKevitt! 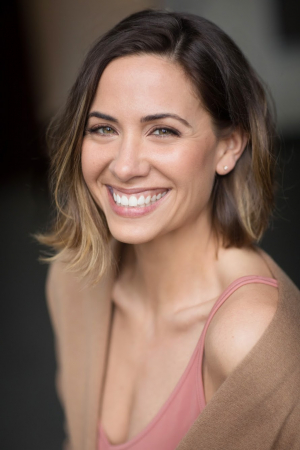 What do you know now that you didn’t know when you started this program?
My solo show helped me really define this voice—everyone’s searching for their voice, right? And my solo show, really, I think was definitive of my trajectory through graduate school. I struggled, really for my first two years, with getting other teacher’s voices out of my head. I kept hearing other people’s voices instead of my hearing my own voice. And through my solo show, and really challenging myself to write in comedy, it was like I was like traveling through every class that I had taken here. And things that stood out were, like, Chekhov, and how it’s actually hilarious, and they’re just really taking a look at their lives and being quite frank about things. So, I learned that if you really apply humor to drama, it becomes more human.

What are you looking forward to being able to do now that you won’t be in class or rehearsal 12 hours a day?
I’m looking forward to the simple things in life. Like, I kept buying books. Over the past three years I've become like an Amazon Prime book buying junky, right? And I’m looking forward to cracking them open. Like, my apartment’s a library, and I cannot wait to dive in. And seeing some sunshine would be really nice. I’m looking forward to getting home to New York City and setting up my apartment to be able to travel back and forth now. And getting to know Los Angeles and making it a home is something I’m really nervous but excited about. Reading though. I’m gonna read a lot.
Any plans for after graduation?
My hope coming to the west coast for grad school was that I could really start solidifying this bi-coastal career. So really setting up my apartment so I can go back and forth, and finding my home in Los Angeles. And I’ve got some writing in the works, which is kind of exciting, ‘cause I used to dread writing. But this last solo show really just invigorated something in me. I know my audience now. Like, I thought the younger female generation would be like “blah blah blah this older woman,” but they were eating it up, and I was like “Oh my God!” I never thought that college-age girls would get my sense of humor. So, there’s something there that isn’t just being an actor, but it’s being someone who can create and inspire. And this younger generation is quite interesting, so… There’s like a lot of research I have to do. So, LA is where I want to spend the majority of my time. But I also don’t want to say bye to Seattle. Not fully.

Do you have a favorite memory from your time here?
You know, we’re busy, in grad school, right? But my class, we’ve found a way to take little family vacations. Sometimes we would call them playing hooky. So, our first family vacation was the night before classes started our first year, and we went to Alki Beach, and we had some dinner, and then we just watched the sunset and took pictures. But my favorite one was just this year, it was in our fall quarter, we went to Bainbridge Island with Cathy Madden for an Alexander Technique conference. We were her examples in class. She was teaching teachers how to work with students, and the majority of them had never seen actors working with Alexander. So, it was cool to see the teachers finding out for the first time how it can be applied to any kind of artist, really. And then, we got some time to ourselves that day to explore the island, and there was a moment where we saw a bunch of log seats in a circle, and we were like, “Oh this must be a magic spot, let’s sit here.” It was just before Thanksgiving, so we decided to go around in a circle and say what we were thankful for, and all of us agreed that we were thankful for each other. And, it’s true. They brought together six totally different people who just managed to stay together through something that’s intimate and difficult and a struggle, and we managed to maintain the bond. It was just really magical. And then, like, some wind blew, and there was a whistle through the air, and we were like “Oh spirits!” And then it became a Shakespeare play.

Also, I’ll never forget callback weekend. I met Tamsen and André that weekend—because Bria, Porscha and Allen were video callbacks—and I remember I was very drawn toward André and Tamsen and I was like “See you guys in class!” And they were like “Ha ha very funny.” And I was right. So they call me the prophetess.

What advice do you have to people who might follow in your footsteps?
I really do believe—it’s not cynical, it’s just honest—if there’s something else that you want to do, do it. Because acting is not—even if you’ve come far enough to be questioning graduate school—there’s no guarantee that you’ll work. And so, it can be very up and down, your paychecks ebb and flow, and therefore your emotions, too, because you think that price equals worth. So I really do think that like if there is something else you can do, something else you want to do, go do it. And I think that if you really sit down and ask yourself that, and the passion feeds you and you still have the drive, that means that you’re on the right path.

If you are coming to the University of Washington, my advice would be, because we’re such a small class, to really find your friend group outside of school, whether you get a café job that you only work on Sunday morning, or meetups, or some sport you play. I’ve always worked in restaurants, so, the first restaurant I worked at here in Seattle—it was on the Ave and it did close—but those people are still my very good friends here. They’re the people I call, they’re the people I see, even though we don’t work together anymore. And that has proved to be very important. They’ve seen me through the whole thing, even when they’re like, “We don’t understand what you do, this is nuts.” And they’ve come to my shows, and they’re super supportive. And I’ll say this for the 2s becoming 3s: It’s good to make those friends in the Seattle community because they will donate to your crowdfunding campaign. [Laughs] I’m just saying if you don’t know anyone, it’s hard.

And I think really being smart about your social media through graduate school is important too. Like, making sure that you’re putting something out there so people know that you’re alive. I mean, my family’s on the other side of the country, so we rarely see each other, so letting them know I’m alive is a really good thing.

Our graduating PATPs are raising money to support their showcase tour to Los Angeles and New York. Learn more about their tour and how you can be a part of launching this talented class into their professional careers by clicking here.