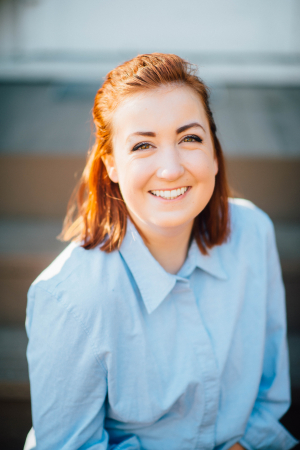 From now until the end of the school year, we will be introducing and celebrating our graduating students, looking back on the work they've done during their time here, and sharing their reflections and wisdom as they head off into the world. Today, we meet graduating Drama major Emma Halliday. Hailing from a once-tiny town in the San Francisco Bay Area that has now become Google headquarters, ("Literally, every time I go home there are even more robots and Teslas roaming the streets," Emma says) she moved to Seattle four years ago to attend UW. A double major in Drama Performance and International Studies, Emma loves performing physical comedy, clowning, Shakespeare, and devised work, and watching and conceptualizing political theatre (which she defines as "theatre telling more unheard, everyday stories from around the world, shaped by the politics and worlds around the characters"), and researching the intersection of global development and politics within the world of theatrical discourse. She's also been the graphic designer for UTS for the past two years, and has gone through "10,000 fonts in the name of art."

What do you know now that you didn’t know when you started here?
Since coming to UW, I’ve learned the importance of trusting myself and my own ideas and interests. That doesn’t mean that there isn’t anything to learn, but the opposite. I’ve learned to be flexible but strong-willed, steady but playful, hard working but free. UW has taught me to make my own opportunities, to ask for help, and to approach everything with an eagerness and an earnestness and truthful complexion.

Leaving UW, I feel that I’m at a crossroads. I have all this knowledge from working nonstop for the past four years, but standing here, looking out at what’s to come next, I don’t know what to do. It reminds me of something Zane [Jones, Senior Lecturer of Acting and Directing] would always say in our acting classes: you do all this behind the scenes work for your character, you read the play, you know the ending, you’ve discovered the stories. But when you go up to perform, you can’t perform those things, because they are now part of you. Right there, right then, it’s just you, and the work that you know and trust you have in every pulse and breath and movement. Behind me, I have all of these experiences and books and classes and projects and highs and lows that have given me what I need, even if it doesn’t feel that way, for this moment. It’s just about trusting that it’s there.

Any plans for after graduation or dreams for the future that you can share?
I am as unsure about my next steps as anyone else! I’m excited to finally have some free time (that exists after graduation, right?) to focus on regaining passions that have been pushed to the side for the past four years. I plan on spending a few years traveling around Oceania (and wherever else in the world that may take me) and exploring what theatre and acting and other forms of art have to present somewhere other than the US. After that, ideas of starting a theatre company, maybe grad school, a PhD. a master's… something, somehow, some way! What this all leads to, I’m very excited to see. (Also if anyone’s looking for a short, red-headed actress/graphic designer… I’m around ;) )

Do you have a favorite memory from your time here?
I had the opportunity to study at the Edinburgh Fringe in 2016, which in of itself was a favorite memory of my time here. But I’ll never forget sitting on the roof of our flat, watching the sunset over the city, the water sparkling, just talking about theater and life. Then I think we went out and sang Scottish karaoke (with Scott [Magelssen, Associate Professor of Theatre History]), in the typical Scottish fashion.

What advice do you have to people who might follow in your footsteps?
Two quotes that have stuck with me through my studies here are “I am enough” and “I can’t go on. I’ll go on." As cheesy as those may sound, they’ve gotten me through the highs and the lows of both life and acting. It takes so much bravery to go out and challenge ourselves in the ways that artists and theatre students do. This all on top of being in college, being on your own, and everything changing but also staying the same. It’s a lot. And that’s okay. Looking back, all I can recommend is to trust yourself and who you are, and to keep moving forward.

Why do we need theatre?
We need theatre because theatre tells human stories, and makes us reflect on human experiences. At the same time, theater can be absolutely anything it wants. It’s real and it’s you and it’s me and it’s Pittsburgh in the 1910s and it’s an etch-a-sketch in a spaceship. The community it creates, both inside and outside of the show, are a group of people who, despite the fact that they haven’t slept for three days, show up and give all they have to the show. Theatre is smart. Theatre is funny. Theatre is challenging. It’s been wrong, and it’s been right. It’s constantly evolving and refuses to go away. And isn’t that amazing?