From now until the end of the school year, we will be introducing and celebrating our graduating students, looking back on the work they've done during their time here, and sharing their reflections and wisdom as they head off into the professional world. Today, in our final installment of this series, we meet graduating MFA lighting designer Matt Webb! You can see some of Matt's work from his time here at UW in the slideshow above. 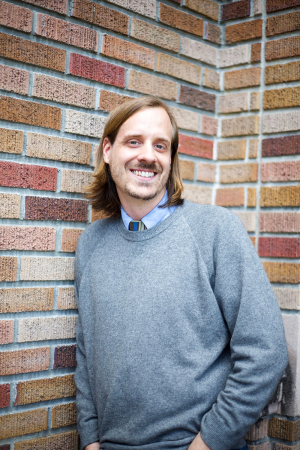 What do you know now that you didn’t know when you started this program?
Well, I know a heck of a lot more about Seattle’s theatre scene, and the way that a city can be integrated with a university theatre department. I really didn’t know anything at all about Seattle or its environs or its work or what students did after school and things like that. Nor do I think I knew a heck of a lot about how a university itself can be integrated into a community, so I’m excited to know about that.

Artistically, I know a hell of a lot more about collaboration and communication with other designers. I think what’s most important to me about what I’ve learned is that a lighting designer can and should be available in the very first conversation with everybody, as they’re creating a world. I took for granted a lighting designer’s sort of last minute role, as part of the final process to tie things together, and I know now that it is equally my responsiblility if not, y’know, my first goal, to be a part of the conversation as we create a world together as a team.

What are you looking forward to being able to do now that you won’t be in class or studio or rehearsal 12 hours a day?
I am most excited to focuse fully on my professional career, and develop myself that way–the sort of networking one has to do, how one connects to other artists. You take that for granted at school ‘cause it’s sort of like happening all around you. I’m really excited to develop that for myself as a full time job, to commit myself to going to see more theatre, which I have not done nearly enough, even in a city filled with good theatre. To be able to just fully devote myself to all the things that it takes to be a freelance designer, to be part of a larger community, to not just take for granted that environment but instead go out and seek it and create it around me. So. I’m really excited about having to figure out what that is. Personally, I’m really excited about spending theatre time with my girlfriend, having an opportunity to work with her as a collaborator, see her work, be part of building a team together. [Editor's note: Matt's girlfriend is also a lighting designer, and just finished her MFA at Yale School of Drama.] ‘Cause we’ve done these two separate things, we’ve developed ourselves as artists, we know each other from this point in our lives three years ago, to now be able to figure out what that is, reintroduce ourselves as artists, as a team, is very exciting.

Any plans for after graduation?
I am moving to New York City, where I’m going to begin the frustrating and complicated career of a freelance designer. I’ve got some opportunities outside [of New York]. I’m coming back to Seattle to design for Seattle Children’s Theatre in the fall. [Editor's note: Matt will design And in this Corner: Cassius Clay, directed by UW Drama PDTP alum Mailka Oyetimein.] And I’m doing a show in Texas for the theatre I used to work for. So, I’m gonna sort of freelance regionally, but I’m going to be based in New York and committing myself to that.

Do you have a favorite memory from your time here?
My favorite things that we did, the things that I think I’m gonna look back the fondest on were the Cino Plays and the Horse in Motion show for the the 75th anniversary, both of which were rough and confusing pieces of theatre, but were completely outside of my storytelling zeitgeist. You know, an immersive piece and this other sort of found space art thing, were both way different than my own understanding of what packaged regional theatre work was supposed to be, and I’m pretty sure ten years from now I’m gonna look back on those pieces of chaos as the fondest, most exciting, most dynamic, most unique things that I got ot be part of.

Personally though, I loved everything about this Seattle Children’s Theatre production of The Journal of Ben Uchida: Citizen 13559. The opportunity to be in Seattle with that company during the 75th anniversary of the Japanese Internment, to be part of a community evaluating itself, to be part of a children’s show committed ot showing young people what that story was and what it still means for people now, was  certainly the most meaningful piece of theatre I’ve ever done. It’s rare that we get to do that. We get to make beautiful theatre all the time. It’s rare that we get to be in an exact moment, in an exact package, in an exact situation, in which only one show can be made, and you have an opportunity to make that. That was really the most satisfying thing.

What advice do you have to people who might follow in your footsteps?
I think you have to know what you want. You have to know who you are before grad school. That doesn’t mean you need to know who you want to be. I think you have to really be clear about what’s important to you as an artist, as a professional, as a student, whatever that is, whatever your in is–to know what is most important to you and be able to hold onto that, to be able to focus on your development. Be open to anything. Be prepared for being challenged, prepared for being pushed. Want that. But, also, have a kernel of what’s important to you as an artist, and use that as kind of a guide to help you to stay focused on  what you need.

Mine is regional theatre. The best theatre to me, the most important theatre to me, is the kind that communities make for themselves. You know, the kind of work that [happens when] a bunch of artists get together with an audience they know, and they curate a season, or they curate a show that they think is unique to that audience and what that audience needs to hear in that time. To be part of that storytelling in that community is the most important thing to me. I’m not that interested in commercial theatre. I’m not particularly interested in some kind of national understanding of what theatre is. What I think is the most important thing is a group of artists who’ve decided they know this audience, they know this city, they know this community, and this is a story we should all share together. To be able to help understand that community, understand that audience, and work on that piece together, I think is the most important thing that any of us can do, and that is absolutely what is most important to me. And I think I’m going to be challenged to maintain that in the big stupid mess that is New York, but that has been my guiding principal and I think it will stay, that we have to all find what our community of artists is and what our audience is, and we can’t forget what either of those two things are.