Interview with an Alum: Markie Hu on Costume Designing Abby and Tabby Alone in the Desert 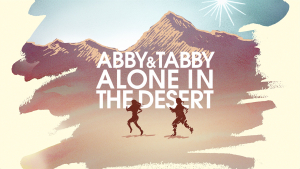 Last year we posted an interview with Jessica Martin, a 2008 BA alum, who at the time was writing, directing, producing, and acting in her first feature film, Abby and Tabby Alone in the Desert. Since then, the film has reached completion and can be streamed on Seed & Spark. Recently we talked with the Costume Designer for Abby and Tabby, Markie Hu, who is also an alumna of the UW School of Drama!

BR: Hi Markie! Congrats on the release of Abby and Tabby Alone in the Desert. We are very excited for you and Jessica. Now, what was your path towards becoming a costume designer?

MH: Acting in my high school theater, I was always excited to find my characters through their costumes. When I got to college, I wanted to try designing, so I got involved with UTS productions, and really found my passion there.

BR: And what was the most exciting part of working on Abby and Tabby?

MH: I love working on small films where everyone is involved in more than one way.   I got to be involved in character building in a way that doesn’t always happen on bigger productions.

BR: How did working with Jessica, another UW Drama alum, differ from working with other directors? Did your shared experience with UW have anything to do with that?

MH: Jessica and I share the philosophy that if you know what you want to make, you have to go get it for yourself rather than waiting for the stars to align. We were both undergrads making a path for ourselves, and we both know how to work a little harder to make our voices heard.

BR: How did your time at UW Drama shape your career today?

MH: UW Drama taught me to collaborate and think critically. I think a rounded drama education has helped me look at the big picture and where my work fits, rather than being hyper focused on costumes. The opportunity to work with graduate students and faculty prepared me for life after college, where professionalism goes a long way. I would also be remiss not to mention what an invaluable mentor I had in Sarah Nash Gates. She helped me move beyond what I thought was possible for myself every step of the way.

MH: If it’s what you want to do, you have to just start doing it. Show up and show interest. Especially in school, you often have to make your own opportunities: if you want to work on that show, or work with that person, make it happen. I still sometimes get work that way.

Check out Abby and Tabby Alone in the Desert here!