Interview with an Alum: Leah Adcock-Starr on Off Road Shakespeare 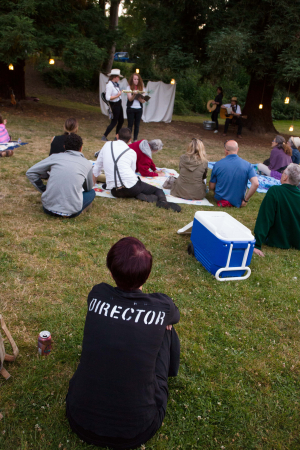 Leah Adcock-Starr at Off Road Shakespeare

Leah Adcock-Starr has been actively working in the Seattle theatre scene since she graduated with her MFA in Directing in 2015. One of Leah's biggest undertakings was forming the Off Road Shakespeare Company, a company dedicated to creating  "brave and beautiful theatre productions for non-traditional spaces and artistically underserved communities." This year Leah is directing Tweflth Night and Macbeth with the company, and we sat down to talk to her about community engagement, the challenges and joys of outdoor performances, and the importance of storytelling.

Can you tell us a little bit about Off Road Shakespeare Company?

LAS: You better believe I can. I mean - I’d rather tell you a lot about Off Road because it’s one of my favorite adventures to talk about...but we’ll start with a little and then maybe we can go grab a coffee or a cider or something and keep the conversation going.

Stories matter. Right? So if that’s true, and stories matter to anybody, then stories matter to everybody.  And that means everybody needs access to them. That’s a problem in most theatre rich communities and it’s a problem in Seattle..where so many of our neighbors are not only lacking access to beauty and story, but also to the most basic human needs there are; shelter, food, and safety.  There are people being left out and while our play will not on its own solve Seattle’s housing crisis or America’s criminalization of poverty or totally dismantle these and other systems of inequity, we can and will work to radically disrupt them by the joyful, intentional, and conscious redistribution of story and beauty in our city. That is at the heart of Off Road. We are a troupe of players, musicians, storytellers, rabble rousers and clowns. Our mission is to make brave and beautiful plays (so far mostly written by Shakespeare, but we have some musicals and new plays and Greeks in our back pocket too…) in non-traditional spaces and for artistically underserved audiences. We partner with local transitional housing communities, shelters for people experiencing homelessness, community centers, public libraries, crisis resource providers, and low-income senior centers to bring them stories for free.

So far, ORS has two primary ways of playing:  On Location and On Tour. When we are ‘On Location,’ we take over a unique public space with a production that showcases the environment in which we are performing (like Ravenna Park or Red Square) and the unique connections between audiences, arts, and the spaces they inhabit.  When we go ‘On Tour,’ we distill the epic scale and scope of our outdoor productions into an intimate, immediate, and imaginative piece of theatre that can fit in the community rooms of local shelters and the basements of public libraries of our numerous partners.

Why did you start the company? What were your goals?

LAS: To make really good plays for the humans who were hungry for them, and to give them away for free.

I was coming off of two big Shakespeare productions in a row that were done in traditional theatre spaces - both beautiful experiences and lovely productions. While I was proud of that work, I was also curious and eager and agitated- scholar brain meets maker brain meets community organizer brain - about how typical theatre practices and spaces might not actually serve the plays Shakespeare wrote or the audience he was writing for as perfectly as we like to assume.  I was yearning to break out of the box a bit; this collided with a desire to re-imagine the traditional Shakespeare in the Parks model. I thought it might be good fun to make an outdoor theatre experience that would never ‘fit’ indoors, a way to engage and dare I say it ‘immerse’ the audience in text and space. Frequent runs through Ravenna Park had left me imagining what it would be like to stage Midsummer on those winding trails, surprising and delighting audiences at every twist and turn.  A wild bunch of mad brilliant humans said yes to this experiment and we made the entire park our dreamscape, and proceeded to get the audience lost in the woods with us.  The ‘On Location’ side of ORS was born.

I’m extremely proud of the successes of that production, but there was a still a core aspect of Off Road that I had been dreaming of and had yet to be realized.  While we had made a play that opened up the traditional Shakespeare in the Park experience to people who might otherwise not have come, we were still dependent upon on our audiences having a certain level of privilege, wealth, and resources in order to gain access to our work.  That’s where we needed to step up.  Having grown up and made lots of theatre in and around the Twin Cities (St. Paul and Minneapolis, MN) I had an abundance of examples of artists and organizations working toward equity and justice in the distribution of art and art experiences. Off Road follows in the footsteps of generous giants; Ten Thousand Things, Mixed Blood, Pillsbury House, and Interact are among the many have impacted me as a maker more than I can say.  So, even before that first production in Ravenna wrapped I was imagining how we might distill our Midsummer and get it on the road. Our first partner was Seattle’s Mary’s Place; a Seattle org that provides shelter and services for women, children, and families. We got back into the rehearsal room and reimagined our roving Midsummer for a one-day, one-stop offering of dinner and a show at their North Seattle location. That was two years ago. This spring, we have nearly two dozen performances with ten different community partners, and our entire creative team spends one ‘rehearsal’ each week during our process in teams across the city volunteering at different Mary’s Place family centers in preparation for our performances there!

What are the challenges about staging Shakespeare in non-traditional spaces?

LAS: Challenges and joys go hand in hand.  If we’re talking about our outdoor public space productions, you are in a living public venue with its own rhythms and quirks.  Rain, mud, Pokemon Go, the surprised cyclist or disrupted family of raccoons. Often, weather is our nemesis: it’s either too hot or too cold.  But even that adds to the experience- after all, the day is hot in Verona and the brick oven of Red Square on UW’s Campus is a perfect spot for the Capuls to be abroad.  One might expect that random passersby might cause a challenge, but from day one we work to be prepared for our unexpected audience. Some of our favorite audience members are ones who weren’t expecting to find a play, and more often than not, we find that they come back.

Our ‘On Tour’ locations, even though they are indoors, are non-traditional theatre spaces.  We play in a square of chairs, under florescent lights, in whatever room will hold us - usually these rooms have multiple purposes AND more often than not it’s the first time that purpose has been to house a play!  Certainly one of the biggest challenges we face on tour is find the best way to play well in an ever changing space for the humans those spaces shelter. The intimacy of such venues is genuinely exciting, humbling, and vital for actors and audiences alike.  It makes the plays better too. It’s impossible for our actors to hide from our audience, the story, or the text and while it can be exhausting, it would be hard to find a workout more rewarding.

How did you education at the UW School of Drama serve you in creating this company and work?

LAS: It put me in rooms with Val Curtis-Newton, and she put me face to face and shoulder to shoulder with the artists and teachers and cohort that roam the halls of Hutchinson. I had teachers who challenged me to get after what I was getting after, but to do it ever better.  Teachers who required me to articulate the what and the why and the for whom. Teachers who let me fail (and not die) and who let me thrive. Teachers who challenged me to experiment and decide and move the table and restage for the spine and land the play in the heart of your audience.

Also. The UW directing program had me directing, writing, designing, moving, acting, reading... making stuff all the time. That’s self producing with epic support - a great precursor to self producing in the real world where you get the support you chase.  Off Road is the place where craft meets heart meets hustle for me. I got to build all those muscles at UW."

What has been the biggest thing you've learned since starting this project?

LAS: That there is such extraordinary need. Sometimes I think of what Off Road does on tour as ‘soul triage’ and we need more hands in service of that work.

But we don’t get to be just one thing.

We are after belly laughs and knowing smiles, tears, moments of joy, a shared meal, or a moment of eye contact and maybe if we are really crackling and the text is tight and the actors are truthy that moment of recognition in a play over 400 years old. Moments of light. I think we need more of them.

It sometimes feels like making plays is insufficient in the bleakness and injustice of things... like maybe I should go do something more important or more urgent, like be a relief worker or a lawyer for the ACLU.  I could do that- lots of people do, and I am grateful to them. But I am a storyteller and I know we need those too.  At the same time we need more affordable housing, equitable access to healthcare, advocacy for human rights, racial justice, education reform, and a radical redistribution of wealth. We don’t get to just be one thing. So - I dunno - I’m learning and re-learning everyday the real importance of making your art as well and as truthfully as you are able, sharing it wide, taking care of each other like we belong to each other, to read more, share more, check your sources and your privilege, and to volunteer and vote like somebody’s life depends on it.

LAS: We have this pretty stellar website that UW PATP powerhouse Anna Lamadrid designed for us (hire her) and if you are into what we are into and want to know more about what we’re up to; you should reach out to us, or catch a performance, or donate some dollars.  We would be grateful to know you and grateful for your support. www.offroadshakespeare.com

Off Road Shakespeare Company's next production will be Macbeth, happening at Ravenna Park in Fall 2019.

To see more of Leah's work, be sure to catch Romeo and Juliet with Wooden O in July/August, and Lucas Hnath's The Christians with Pony World Theatre in October.