We are thrilled to be able to announce the appointment of Dr. Todd London as the new Executive Director of the UW School of Drama. Dr. London comes to us from New York, where he is currently the Artistic Director of New Dramatists. After 20 years of leadership, Sarah Nash Gates will retire from her post as Executive Director this summer, and Dr. London will officially assume his new role August 1.

Read the full press release HERE, and join us in welcoming Dr. London to the School of Drama! 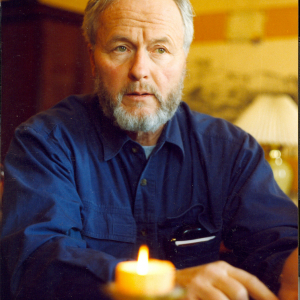 Join the School of Drama for dinner and a new play reading with Professor Mark Jenkins. On Tuesday, May 13, Professor Jenkins will stage four scenes from his new play Red Earth, Gold Gate, Shadow Sky. He will discuss his playwriting process, which involved research trips to Cambodia, first-person interviews and developmental workshops. Director Victor Pappas will also be in attendance to speak and take questions about the play. This play won ACT Theatre’s 2013 New Play Award and will premiere as part of ACT’s 2015 season.

Up Next: The Workroom

Jean-Claude Grumberg’s The Workroom is a stunning portrait of two male and six female laborers surviving in Paris after World War II. Little changes in their cramped, airless tailor’s workroom except the fabrics they stitch together. This touching play presents students with an opportunity to broaden their dramatic acting skills as they relay the emotional story of eight survivors desperately trying to sew together the fragments of their severed post-war lives.

A post-show talk will be held on Thursday, June 5.

After his dog dies from rabies, CB begins to question the existence of an afterlife. His best friend is too burnt out to provide any coherent speculation, his sister has gone goth, his ex-girlfriend has recently been institutionalized, and his other friends are too inebriated to give him any sort of solace. But a chance meeting with a long-lost friend offers CB peace of mind and sets in motion a chain of events that pushes the characters' numerous identity crises to their very limits. Loosely based on Charles M. Schulz's beloved "Peanuts" characters, Dog Sees God is a stark snapshot of a generation that desperately needs to connect. 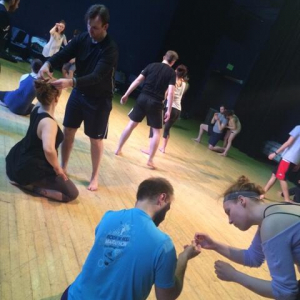 Whit MacLaughlin and members of the New Paradise Laboratories are currently in residence at the School of Drama, working with our Professional Actor Training Program students to devise a new production that will launch our 2014-2015 season.

Over the course of the three-week residency, PATP students are training with MacLaughlin in the mornings, before being joined by NPL ensemble members for afternoon workshops.

MacLaughlin is the artistic director of New Paradise Laboratories and an OBIE and Barrymore Award winner. This residency and the new production premiering in fall 2014 provides an incredible opportunity for all our MFA students to work closely with a company devoted to a devised, ensemble creative process and artistic entrepreneurship.

Allison Leach, BA '00, is currently designing for Mattel's first foray into live-action film. After which, she'll work on the design and build for 400 custom costumes for the Ringling Bros' 2015 arena tour.

Gregory North, PATP '85, will appear in the world premiere of Sting's The Last Ship, opening next month in Chicago before its Broadway debut this September.

Lezlie Cross, PhD '13, has been offered a tenure-track position at the University of Nevada Las Vegas, where she has been a Visiting Assistant Professor for the past year.

And CONGRATULATIONS to our two alums to receive Tony nominations! Linda Emond,...

Saturday, May 10
30/30 Seattle Readings: Learn to be Latina
Presented by UW School of Drama, The Hansberry Project, eSe Teatro, and No Passport

For a full list of upcoming shows and events, visit drama.uw.edu