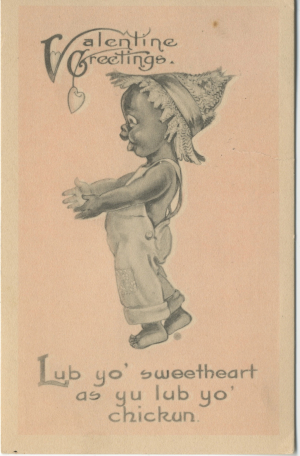 An early twentieth-century Valentine (from the collection of Harvey Young, used with permission)

The UW Performance Studies Research Group is pleased to announce a lecture by Harvey Young, Northwestern University, on Friday, January 22, in the Simpson Center for the Humanities. Please join us!

This presentation spotlights the darker side of Valentine’s Day, the sending of caricature greeting cards featuring popular (and negative) stereotypes of African Americans. Harvey Young reveals the wide appeal of such cards and discusses how their circulation informed 20th century US racial discourse. Applying the language of performance studies to activate the material archive, Young demonstrates how early valentines enabled “race play,” a role playing of and a reveling in the excesses of imagined black identity.

A reception follows in the Simpson Center (CMU 206).

Harvey Young’s research on the performance and experience of race has been widely published in academic journals, profiled in The New Yorker, The Wall Street Journal and The Chronicle of Higher Education and cited in The New York Times and The Boston Globe. He has published seven books, including Embodying Black Experience, winner of “Book of the Year” awards from the National Communication Association and the American Society for Theatre Research and, most recently, Black Theater is Black Life: An Oral History of Chicago Theater (coauthored with Mecca Zabriskie). Dr. Young has served on the Board of Directors of the American Society for Theatre Research, the Yale Club of Chicago, and the African American Arts Alliance of Chicago. A former Harvard and Stanford fellow, he graduated with honors from Yale and holds a Ph.D. from Cornell. He is currently President-elect of the Association for Theatre in Higher Education, the largest association dedicated to college/university theatre with nearly 2,000 members, and the editor of Theatre Survey, the journal of the American Society for Theatre Research.

About the Performance Studies Research Group