State of the Theatre: Stage and Sword 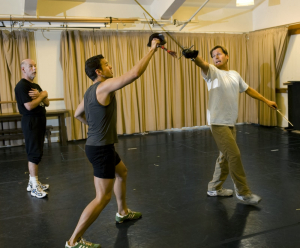 The second installment of this year’s State of Theatre series will feature an accomplished panel of local, stage combat practitioners in conversation with longtime Seattle Times theatre critic, lecturer, and author Misha Berson.

Whether it is a Shakespearean sword fight, a mock boxing duel, or a danced-out gang rumble, combat can be an essential and exciting aspect of live drama.  A panel of experts in theatrical combat, led by University of Washington Drama School instructor Geoffrey Alm and including local stage combat experts Stacey Bush, Ryan Spickard, Lee Ann Hittenberg, and Tom Dewey, will discuss the secrets of choreographing dynamic, suspenseful stage fights – while protecting the actors involved from harm.

This event is free and open to the public.