Celebrity and Its Discontents - Odai Johnson 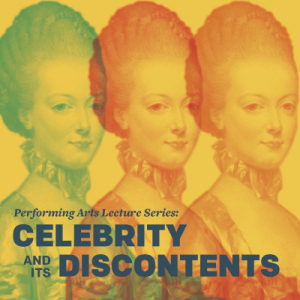 Odai Johnson is a professor of theatre history and the head of the School of Drama’s PhD program, as well as a founding member of the Center for Performance Studies. His lecture, “The Predatory Gaze of Looking,” kicks off the third-annual Performing Arts Lecture Series.

This year’s Performing Arts Lecture Series takes on the topic of celebrity. The series not only addresses the process of acquiring fame, the mechanisms of its reproduction, and the discontents behind this excess of looking – that is, not just ‘celebrity’ as a pronoun (that remarkable person) – but ‘Celebrity’ as a process of consumption. To acquire what Joseph Roach has called ‘It’ seems to be the compulsion of the media, but we would do well to ask what does ‘It’ acquire? We know a great deal about the consuming interests of the celebrated, but what does the state of celebrity itself consume? What does it require of its host?

To acquire what Joseph Roach has called ‘It’ seems to be the compulsion of the media, but we would do well to ask what does ‘It’ acquire?

Fame and the famous have been around for millennia, but celebrity is the production of media, and thus a modern phenomenon with a shorter and more intense history. If Fame lived in the rare and exceptional figure, celebrity lives in reproduction and access. Walter Benjamin considered this process as the loss of the aura of authenticity, where the subject becomes first replicated and then a commodity in the marketplace. Large industries have grown up around the production and consumption of the celebrity – from fanzines to material products, images and their legal standing, sighting tours, even the DNA of the celebrity trademarked and sold. The process itself has been subjected to critical lenses. John Synge’s Playboy of the Western World stages exactly the process of inflating the ordinary into the heroic, and then quickly dismantling the ‘Playboy’ back to his banal and ordinary peasant-self. We are accustomed to consuming the disgrace of the celebrated. Less familiar, and certainly less studied and less visible, is how the process of celebrity consumes the artist it feeds upon.

The first of the lectures considers exactly this relationship of consumption. Bob Dylan wrote of the great loss of artistry he suffered after Woodstock, when he could no longer look at the world because he had become instead the thing looked at. “Artists shouldn’t be made famous,” said Kate Bush, as she dropped off the public stage for thirty-five years to build songs instead of celebrity. The thoughtful, careful artist can sometimes negotiate the life of making art and making fame – some even gracefully – but largely that relationship is marked by a certain predatory practice of Celebrity as a many-headed beast feasting on its host.

The lecture series is part of the university’s commitment to public scholarship and essential to the School of Drama’s mission of sharing our work with the world.

Celebrity and Its Discontents is a three-part series. All lectures are held on Tuesday evenings at 7:30 pm in the Glenn Hughes Penthouse Theatre. Tickets are free for UW students and $10/lecture for everyone else. Buy your tickets in advance online.