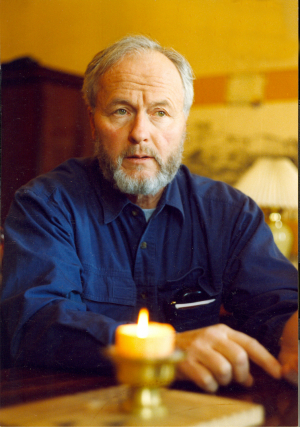 For professor and playwright Mark Jenkins, the saga of bringing his Red Earth, Gold Gate, Shadow Sky to the stage is appropriate for the way it mirrors the episodic nature of the play itself.

It started when friend, visual artist, and activist Don Fels invited Mark to Cambodia in the hopes of convincing him to write about the plight of Cambodian deportation. In Phnom Penh, Mark interviewed individuals who had grown up in the United States, got involved in criminal activity, served time in prison, and—regardless of whether or not they had been rehabilitated—were deported back to Cambodia.

The play presents that saga. It takes place over the course of 25 years, weaving through refugee camps, the American streets, prison, and other kinds of incarceration. It has magical realism and mythological creatures, addressing the deep history Cambodians have with their mythology.

Over the course of writing the play, after his return from Cambodia, Mark consulted with members of the Cambodian American community in Seattle.

“I got the trust of some in the community. People invited me into their homes and shared with me their lives and their stories,” says Mark. “It’s a big deal to get the trust of this community. I think it’s important to note that Victor [Pappas, the play’s director] and I are both white, middle-aged Americans. There’s a kind of presumption in telling the story of another culture. We are very aware—very respectful of the culture—and aim to represent it as accurately as possible, and with the input of the community.”

Four years ago, the first act of Red Earth, Gold Gate, Shadow Sky received a staged reading in collaboration with the School of Drama, the Henry Art Gallery, and High Point Community Center. The Henry Art Gallery staged an exhibition of work by Cambodian sculptor Sopheap Pich, who consulted on scenic elements of the play. The readings were held at the Cabaret Theatre in Hutchinson Hall, as well as at High Point Community Center.

Then, in 2013, the play received the New Play Award from ACT—A Contemporary Theatre. That summer, during workshops at ACT, Mark and director Victor Pappas made a realization that has the potential to impact an entire community of theatre artists.

“It became pretty evident that the play wasn’t going to fly unless we had Asian actors; people that understood the culture and understood the context,” explains Mark. “In this instance, it was a distortion to work with Caucasian actors. Culturally, it just didn’t make any sense.”

So, Mark and Victor set out to cultivate the actors they needed, regardless of previous theatre training. They began offering free acting classes for Asian Americans with the hope that some of them would mature into the caliber of actor needed for a professional production.

“The workshop took on a life of its own and we realized that there is a real hunger for these classes and these opportunities,” says Mark.

The group, now officially called the Asian American Theatre Workshop, constitutes members of the Asian American community, as well as students from the School of Drama. Joe Ngo, a member of the Professional Actor Training Program class of 2015, has attended the workshop and has been asked by Mark and Victor to teach in it as well.

“We’re hoping that, ultimately, it will be a self-generating organism—whether or not Victor or I are involved,” says Mark.

Which brings us to today, and the next iteration of Red Earth, Gold Gate, Shadow Sky—a staged reading at the Jones Playhouse at 7:00 pm on July 25th and 6pm on July 26th, which is receiving the extra benefit of the fundraising, outreach, and costuming expertise of former School of Drama Executive Director and Professor Emerita Sarah Nash Gates, who is serving as coordinator of the project.

“I’m hoping these workshops and this play will kick-start people from the Asian American communities writing their stories themselves,” says Mark. “Some of our workshop students are getting very interested in telling their own stories. We introduced them to the idea of what theatre is and can be, and it’s just delightful to watch how they’re taking to it.”