Get to Know: Skip Mercier, senior lecturer in design 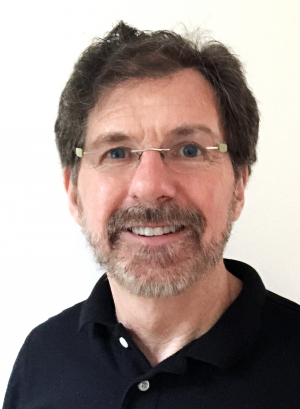 Skip Mercier is half-way through his second quarter as senior lecturer in design at the UW School of Drama. In addition to his teaching responsibilities, he keeps an active professional career in scenic, costume, and puppet design. Skip recently answered a few questions about his work and teaching experience at UW.

You have two shows up in New York City right now. Can you tell us a little about each of them?

Old Hats by Bill Irwin and David Shiner with music by Shaina Taub, directed by Tina Landau, opened at Signature Theatre on February 18. It is a modern vaudeville with the “clowns” Bill and David transforming into different characters for each sketch. They are in competition for Shaina’s attention who drives the show with songs and music. I designed the set, costumes, and puppets for the New York premiere in 2014. Last season I re-conceived it for ACT in San Francisco. Due to popularity and critical acclaim it returned to New York, and we are in discussion with producers that want to tour it in Germany and Russia after it completes the New York run.

The second show is Head of Passes by Tarell McCraney, also directed by Tina Landau, for which I designed the set. It is a deeply moving drama about family, acceptance, and the power of faith. The show began rehearsals with Phylicia Rashad on February 15. This is the New York premiere by the Public Theater and will open in March. I won the Theatre Bay Area Award for Outstanding Scenic Design for the production mounted at Berkeley Rep last season. The script includes my favorite stage direction of all time: “The swell of the storm comes hard the lights flicker and flicker. The house begins to tilt and sink. A loud crash is heard. Lights.”

My friend Gay Smith (a dramaturg I worked with for several years at The O'Neill Theatre Center) called me to say that Todd London had relocated to Seattle. She knew that I was being considered for several design positions as I reached a point in my career that I wanted to give my experience to future designers. I knew of Todd's work at New Dramatists supporting playwrights as I was Resident Designer for the National Playwright's Conference at the O'Neill. I was extremely curious about what would make Todd believe in this school enough to come here. Todd and I met and began to explore possibilities of me coming to UW. When I spent time with Geoff Korf, Tom Lynch, Deb Trout, and Andy Smith, all highly respected designers in the field, and the graduate students in studio I instantly understood that this was an exciting and creatively stimulating environment. There is a holistic sceneography approach to work that does not separate the role of sets, costume, lights, or sound (while respecting the individual jobs and skill set) but with the director unifies all parts into a cohesive whole. The students learn about all aspects of design. It is how I work. These teacher-designers celebrate the individuality of students and their ideas. It was unlike any school I had experienced since graduating from Yale School of Drama.

When I spent time with Geoff Korf, Tom Lynch, Deb Trout, and Andy Smith, all highly respected designers in the field, and the graduate students in studio I instantly understood that this was an exciting and creatively stimulating environment. There is a holistic sceneography approach to work that does not separate the role of sets, costume, lights, or sound (while respecting the individual jobs and skill set) but with the director unifies all parts into a cohesive whole.

How does teaching feed your professional career?

Provoking student designers to reach higher makes me reach higher. I think of teaching as asking the right questions so we can discover together. It is not different than my professional work. Our students are remarkably smart, talented, and intuitive. I receive as much from them as they from me. Teaching does not feed my professional career as much as it feeds me as an artist. I am more interested in launching their professional careers.

You work with both undergraduates and MFA students. What do you enjoy about each of these stages in a designer’s training?

I taught graduate students at University of Michigan when I was a blooming designer and before that undergraduates at Stony Brook State University of New York, I realized that building my own career did not provide the time and attention that the students needed and deserved. I made a choice then to focus on my work designing sets, costumes, and puppets. After 260 shows I am at a place in my life to fully commit to future designers as the priority while relying on my collaborators to keep me in the field. The graduate designers have committed to their own career journeys and work very hard. I appreciate the difference between being a safety net one minute and pushing them to reach higher the next.

I have taught undergraduates for 30 years at the National Theatre Institute at the O'Neill. I am continually amazed by the possibility they see with the right encouragement. They readily dream of worlds yet to be created and carry the belief that nothing is impossible. It is always interesting to be in a room of widely different interests, cultures, and life awareness—it stimulates us all. This is true for grads and undergrads. The grads have the opportunity for more continual and steady focus. The undergrads have the advantage of feeding multiple parts of themselves simultaneously because they generally are exploring many directions that propel them.

It is always interesting to be in a room of widely different interests, cultures, and life awareness—it stimulates us all. This is true for grads and undergrads.

What are you looking forward to in the coming year at the School of Drama?

It is terrific that Tim Bond has joined the faculty. I will see my first-year grad students design fully realized shows. I am working with the design faculty to recruit designers that will benefit most from investing their imagination in our program. I am anxious to roll up my sleeves with new students.

I am designing the set and costumes for A Streetcar Named Desire at Portland Center Stage with Chris Coleman, a frequent collaborator. I am working with playwrights that are interested in creating a new form of theatre that I founded called Omni Dimensional Theatre in which story happens on a smart phone simultaneously with live performance. I am also a creative consultant for Chance magazine, which is about to embark on a greater international reach.