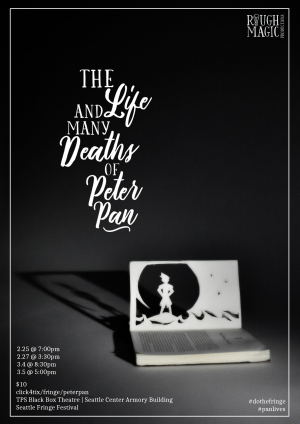 By Taigé Kussman and Mimi Santos

A little over a year ago, third-year MFA directing candidate Leah Adcock-Starr (now a graduate) gathered a group of artists from the University of Washington and Seattle theatre community to devise a new play about JM Barrie and his creation, Peter Pan. That devised piece had a three performance workshop run at the Penthouse Theatre in November of 2015. After the workshop, the play went back into the incubator until an opportunity arose to produce it at the 2016 Seattle Fringe Festival! Out of the incubator and into rehearsal went the little play about Pan. The re-imagined play The Life and Many Deaths of Peter Pan goes up at the Seattle Fringe Festival February 25–March 5, 2016. The company includes seven UW Drama alumni: Leah Adcock-Starr (director, MFA '15), Melinda Hare (costume design, MFA '15), Julia Welch (set and puppet design, MFA '15), Ryn Flynn (lighting design, MFA '14), Taigé’ Kussman (ensemble, BA '14), Mimi Santos (ensemble, BA '15), and Meghan Woffinden (stage manager, BA '14), and features the work of Grisha London as Peter Pan.

This week Taigé and Mimi sat down to reflect on the process of resurrecting Pan.

Taigé: So we just went back through our old scripts to find the name of the first workshop script…

Mimi: The Boy Who Couldn’t Grow Up. Wow. This project has evolved so much.

T: Talk to me about the workshop.

M: The title before is a good way to explain what we first tackled in the workshop. It was the process where we got to know Pan, JMB, the boy David—the boys who couldn’t grow up. It was a discovery process where we were all immersed in and discovering what this project could become.

T: And what did the workshop become, for you?

M: It was one of the biggest learning experiences I had at UW. The big focus for me, a big discovery of the process, was how JM Barrie created something so wonderful out of his great loss and grief. During rehearsal, time was different. We would go into the room and all of the sudden, “You are released.” The room was so focused, the energy was so pleasant, and there was so much work happening. You didn’t feel time passing.

T: Yeah. And I guess stakes were high too. We had what? Just a few weeks? How many weeks?

T: Four weeks to devise something. To create something from nothing. Well, nothing but a stack of books and our imaginations.

M: Our fears. That was a big one for me. The openness to address all of that, working together to look at our fears. Through this whole process, that’s been something we continue to ask of each other.

We have new characters now and new company members. What’s that been like for you?

T: Not only do we have new characters and company members, but the characters and cast members that have always been a part of the story have grown quite a bit. The script and the story feels new in a lot of ways. One of the challenges in coming back to the room with this devised piece of work is that I knew I had to find ways to let go of what had already happened so that I could be open to what it needed to become. I would like to say that was simple, but there is a little bit of resistance or even psycho-physical memories that you have to work pretty hard to get out of.

One of the challenges in coming back to the room with this devised piece of work is that I knew I had to find ways to let go of what had already happened so that I could be open to what it needed to become.

M: I definitely agree. Especially in the creation of Neverland. There are lines that were previously said by someone else in the past script that I say in this version now. I have to ask myself, “Why were those lines said like that before and what do I need to bring now?”

M: What was something that delighted you at our first table read and that’s sticking with you still?

T: It was so exciting to have Kieran Adcock-Starr, one of our actors in the initial workshop, take up the mantle to be our playwright in this second iteration of the production; to have him sit us down with a script that developed tremendously over the past year. It was delightful to see the story was no longer a series of whimsical vignettes or charming stories from the author’s life, but that it was a story. For real. It gets at the tragedy and loss experienced by Barrie. The ways that shadow and light, pain and joy, the macabre and the magic, adulthood and childhood affect one another is a part of all of us.

The ways that shadow and light, pain and joy, the macabre and the magic, adulthood and childhood affect one another is a part of all of us.

One of the things I have found to be quite exciting is that we, as young artists who are not in a collective or a company, have the opportunity to work with the same artists twice in one year on the same project. What has that been like for you?

M: It’s been really great. It feels like a family where we’re not afraid to take risks. It’s always hard for me to take big risks at the beginning of a process because there’s the fear of being judged. That hasn’t been my experience with this group. There’s no mistake making. We learn from the things that don’t work and move forward.

There’s no mistake making. We learn from the things that don’t work and move forward.

T: What’s it been like to watch this same group of artists work over time?

M: Right. At the time of the workshop, our design team was all finishing up their grad school degrees or right out of grad school, so they had a lot on their plates. Even now, they’re all so busy. Julia just got done with Really Really, Melinda had Prelude to a Kiss, and they’re all working artists. But in this iteration of the process, they are fully invested in bringing this story to life.

T: Yeah that’s been really cool. We’re an independent company, with limited resources. Everything is being created from scratch.

M: Our costumes truly look like they’re being created by the Lost Girls. Melinda is making these cohesive looks that are made from a hodge-podge of pieces. We’ve got found items like this trunk, our Tinker Trunk, which is used as our means to access the magi. I can’t believe I almost broke it yesterday in rehearsal.

M: Oh! I didn’t think you were actually going to write that.

T: I’m keeping it real for you, Mimi.

M: Right now, we’re reaching that point where we’re getting ready to share the work. There’s still much to be done, but it’s exciting. If you could tell people one reason to see the show, what would it be?

T: This show takes you back so that you can go forward. The gift of that journey is that it asks you to be utterly present: with memories, with pain, with joy. What do you got?

M: It holds moments of happy thoughts and great memories and the life of a person. This time around the story has captured creation in moments of grief.

The Life and Many Deaths of Peter Pan at the Seattle Fringe Festival Feb. 25th–March 5th! For more information go to http://seattlefringefestival.org/life-deaths-peter-pan/. Tickets available here:  www.click4tix.com/fringe/peterpan