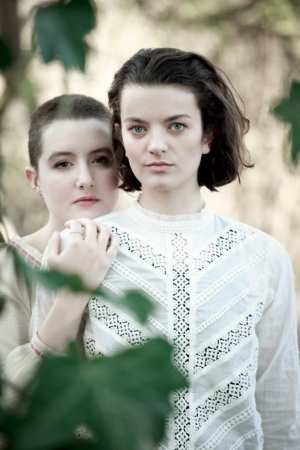 Annie Willis as Orlando and Gabi Boettner as Sasha. Photo by Mike Hipple.

Up next on the School of Drama main stage is Orlando, adapted by Sarah Ruhl from the novel by Virginia Woolf and directed by Professor L. Zane Jones. The production runs April 28th – May 7th at the Glenn Hughes Penthouse Theatre.

Orlando explores sex, love, and identity in a story that spans centuries. Orlando is a handsome, young English nobleman favored by queens and princesses. The poem he’s trying to write isn’t going well; otherwise, he’s having a very nice life. When he consorts with a gypsy, however, things take a strange turn: he awakens from a seven-day sleep transformed into a woman…and an immortal.

Virginia Woolf’s Orlando is one of literature’s most beloved fantasies—a love letter, a biography, and an epic poem that Woolf called, “too long to be a joke and too frivolous to be taken seriously.” Sarah’s Ruhl’s dreamy adaptation is a fun, sexy, gender-bending romp through 300 years of literary history.

Orlando features vibrant music, moments of improvisation, physical exploration and performances, and an ensemble of undergraduate actors. Director Jones says, “I am looking to present this play with inspiration found in the styles that each of the two writers present. It is a dream, a romp, a carnival, and a fantasy. The story evokes a playful and profound feeling that comes from the representation of these two writers' distinct voices.”