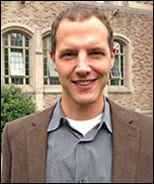 The Performance Studies Research Group, a cross-disciplinary research cluster hosted by the School of Drama and sponsored by the Simpson Center for the Humanities, is creating new opportunities for conversation across the University of Washington campus about the ways in which our lives intersect with Performance. Created in the Fall of 2014 by School of Drama faculty members Scott Magelssen and Stefka Mihaylova, with a grant from the Simpson Center, the Performance Studies Research Group is a gathering place for faculty and students from many different programs to talk about compelling issues in Performance Studies, to discuss foundational and new work, and to engage with scholars in the discipline from U.S. and international universities.

Performance Studies is a relatively new field. Emerging in the 1970’s out of disciplines like Drama, Anthropology, Communication, and Folklore, Performance Studies Departments were created at schools like Northwestern and New York University. Since then, new departments and programs have emerged across the nation and the globe. Performance Studies looks not only at how performance is used in artistic practices, but how it is used to communicate, to share and preserve cultural knowledge, to form and display individual and group identities, and even to heal and engage in spirituality and religion. The UW Center for Performance Studies was created in 2010 as a consortium of graduate programs in the Arts and Humanities at the University of Washington that each teach some aspect of performance culture. Graduate students build a curriculum across these programs in order to get a rigorous foundation in performance history and theory; and the participating programs come together in a kind of commons to share students, faculty, and resources. The newly created Performance Studies Research Group adds to these resources by bringing participants together from all these disciplines for public events that encourage and expand cross-disciplinary conversation on the UW campus.

Performance Studies looks not only at how performance is used in artistic practices, but how it is used to communicate, to share and preserve cultural knowledge, to form and display individual and group identities, and even to heal and engage in spirituality and religion.

The group meets regularly each term in the Simpson Center to discuss readings selected by members of the group, to plan events, and to talk about each other’s current research. Members come from Drama, Germanics, Cultural Studies, Asian Languages and Literature, Anthropology, Dance, and many other programs.

In the fall of 2014, we invited Dr. Shannon Jackson from the Department of Theatre, Dance and Performance Studies University of California, Berkeley to give a talk entitled “The Way We Perform Now.” Dr. Jackson, whose work has treated the history of disciplinary boundaries in the academy, gave her own brief history of the genealogy of Performance Studies as a discipline and, by virtue of its roots, the kinds of theoretical, political, and even activist strains it has taken on. She also shared some of her recent work on the intersections between performance and art museums.

In March of 2015, we were joined by Dr. Soyini Madison from the Department of Performance Studies at Northwestern University. Dr. Madison, whose ethnographic work treats indigeneity and performance as activism in places like Ghana, shared a talk entitled “Beauty, Praxis, and Performance Ethnography,” in which she told stories of her work as a performance ethnographer in Africa and explored some of her newest work on the politics and aesthetics of beauty as a phenomenon.

This April (2015), the Performance Studies Research Group hosted its third speaker, Dr. Rebecca Schneider from the Department of Theatre Arts and Performance Studies at Brown University. Dr. Schneider’s talk expanded on her recent published scholarship dealing with performance, memory, history, and the body to discuss the tricky issue of live-ness in artwork and representation, including cave wall paintings in prehistoric sites in France. All the events in the Performance Studies Research Group speaker series are followed by a reception and continued conversation with refreshments in the Simpson Center.

Through these activities, reading groups, and quarterly talks by invited speakers, the Performance Studies Research Group is laying the foundations for the University of Washington to be a vital space for sustained conversation about how Performance Studies helps us know the world around us.

More about the group and upcoming events here:

To be added to the group, and to receive information about upcoming meetings, readings, and events, please email your name and contact information to Scott Magelssen (magelss@uw.edu)