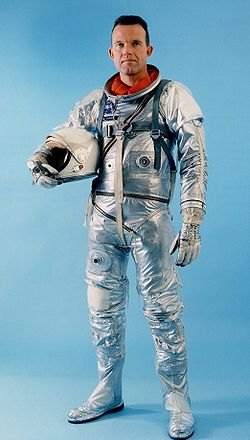 Without question, the origins of the United States’ space program were fundamentally tied up in the Cold War with the Soviet Union. NASA, while strategically designed as an ostensibly peaceful civilian enterprise from the start in 1958, had, for its first three decades, been a paramilitary operation bent on not only a gentleman’s race against the Russians to reach the cosmos, but a very real effort to command space as the next battlefield. Also without question, the American astronaut was key to the success of this effort, both in guaranteeing the American people were on board, and securing the necessary funding from Congress. This talk concerns the way the late 1950s and early 1960s saw a deliberate performative effort to create a new kind of individual that had not previously existed except in science fiction, and how the performance of astronaut, as such, was in fact the end in and of itself. The labor was propaganda of decidedly high stakes. Sputnik 1, launched by the Soviet Union in October of 1957, and feared as a harbinger of nuclear bombs from space, caused a state of military and political anxiety requiring immediate funding and enormous redirection of military and commercial labor. But the invention, and April 1959 introduction, of the first Project Mercury astronauts, though hurried, was a product of several years of determined dramaturgy, resulting, I argue, in a Baudrillardian simulacrum, a composite signifier with a referent that only existed in an engineered imagination. It was important to produce and disseminate a specific kind of astronaut figure in American and world consciousness. Aside from height and age requirements, the astronaut needed, specifically, to be an active-duty military test pilot—and therefore white and male—cool and unflappable under pressure, and a model par excellence of American small town values, which included being a patriot, a Protestant and a family man. The astronaut’s raced and gendered qualities and comportment were policed both through social grooming and the shaping of policies on and off the books by legislative and executive branches of the government. In other words, delimiting the choice of the first men destined for space and to ensure that the Mercury Seven hewed to the character description in the public eye necessitated specific discursive and political actions. These labors to produce and disseminate the American astronaut were undertaken by NASA public relations, Life magazine and other print media, network television personalities like Walter Cronkite (who reported live from all six manned Mercury launches for CBS), and the Mercury astronauts themselves.

Let me be clear. The human element in the first phase of NASA’s space program, Project Mercury, was unnecessary from an engineering point of view. For NASA engineers, the Mercury astronauts were required solely as test subjects to determine the human body’s resilience to the extremes of space travel, which could just as easily be gleaned from other primates like chimpanzees. Given that, in the engineers’ words, “the astronaut [had] been added to the system as a redundant component,” it becomes clear that the invention of the American astronaut was almost exclusively performative, and that he fulfilled, if not the actual job of flying spaceships into orbit and eventually the moon, the vital narrative and propagandistic function of staging the American story of the United States’ prowess in this final frontier, with all the imperialist, exceptionalist, expansionist, and patriarchal overtones attending to that metaphor.